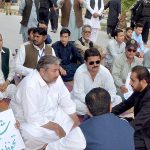 QUETTA: Balochistan Chief Minister Abdul Quddus Bizenjo said that it is the responsibility of the state to give safety of life to its citizens and for that, our law enforcement agencies are working day and night. He was talking with delegation members of Hazara Democratic Party who called on him on Monday at the CM […]

Three people were killed and two received injuries when unidentified armed men riding a motorbike, opened fire on them at Jan Muhammad Road, Quetta on Sunday. According to initial reports, the armed men opened fire on five different shops, killing Ali Khan, Muhammad Waqas and Shabir Ahmed on the spot. The injured were shifted to […]