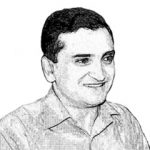 The first two decades of the 21st century saw the ravaged, threatened, and stretched fixture of the nation-statestested for the mettle they were made of. The moderates, liberals, and progressives had to rethink the ideals and factors which, they thought, keep the people united as a nation. Pakistan was also amongst those states which faced […]

Since the creation of Pakistan, severaldomestic disordersparticularly in the domain of internal security emerged from ethnic movements. So, if this happens again in the future, it will never be for the first time for the countrythat a peripheral nationalist movementhas erupted on the social and political horizon. However, such an event will advance and group […]

Before the Covid-19 pandemic, schools and kinder cares were mushrooming throughout the lengths and breadths of our cities determinedly working like factories where children are put on a production line and rolled out at the other end in groups and batches. However, with the corona virus affecting all other sectors in the country, these schools […]

From a layperson on a tea stall in a village to an astute diplomat in Islamabad, everyone knows and understands a basic principle, ‘if you offer your back – everyone will ride’. For Pakistan, this would not be the only time when someone wants us back for a free joy ride. While oil-rich countries in […]

Each year 4th of August is commemorated as Police Shuhada day to honour the cops who fell in the line of their duty. Police in our country is not only responsible for maintaining routine law and order but also shoulders the additional heavy responsibility of acting as the first line response force in fighting terrorism […]

Recently a scandal about harassment of students by teachers in a private school surfaced in Punjab. Amid lot of statements and evidences, provincial government also shunted in promising a fair investigation and punishment to all accused teachers. This case of harassment by the depraved is not a unique or one of fewer cases of perversion […]

Gilgit-Baltistan has once again attracted attention of digital right activists in the country. The undernoted movement that simmered for several years in the recent past, has now grown into a full-fledged campaign. A humble movement focusing on genuine issue of internet connectivity has now marked its place amongst the top trends on social media platforms. […]

Despite being blessed as the fifth largest gemstone reserve, Pakistan has not been able to develop an internationally competitive gems industry so far. Being home to world-recognized expensive jewels and its abundant reserves of precious and semi-precious gemstones, Pakistan should have significantly dominated the international market for precious rocks. However, despite the country’s unquestionable potential, […]

Ending one’s life is probably the hardest decision for anybody. It is difficult to imagine what makes a person to commit suicide. What so ever may be the reason amongst a long list of causes identified by experts in relevant subject; it is for sure that the one making this lethal decision fails to see […]

I am a feminist. You may call me radical, but I believe that respecting women is one of the most important things taught by every religion. It is a definite norm for everyone to uphold in life. However, these days I am bit shaken by issues around the ongoing scandal which has pushed the entire […]