The writer is the author of Fiction of Nationality in an Era of Transnationalism, Islam, Women, and Violence in Kashmir, The Life of a Kashmiri Woman, and the editor of The Parchment of Kashmir. Nyla Ali Khan has also served as guest editor working on articles from the Jammu and Kashmir region for Oxford University Press (New York), helping to identify, commission, and review articles. She can be reached at [email protected] 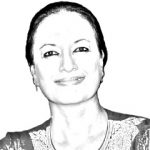 The severance of India and Pakistan in 1947 politicized not just religious identities but linguistic identities as well. I would argue that in her book Siren Song: Understanding Pakistan through Its Women Singers, Fawzia Afzal-Khan explores the constitutive elements of the post-independence sense of the nation. She delineates internal hierarchies entrenched by nationalism in relation […]

In the southern Indian state of Telangana at least 23 teenagers have killed themselves since the scores of their school-leaving exam results, processed by a private software firm, Globarena Technology, were announced in April. The state education board of Telangana has impersonalized education by outsourcing the job of conducting the school-leaving exam, processing the scores, […]

Masood Ashraf Raja’s book ISIS: Ideology, Symbolics, and Counternarrativesattempts to come to terms with the transnational practices of Islam and Islamism, constituted within historically and geographically specific points of origin and migration. The specific religion and the specific local and national contexts within which it is practiced shape the affiliations that Migrants can fashion with […]

After reading some interesting analyses of the dominance of the Hindi-belt in India, I thought about my work on culture, language, and politics, specifically the decay of Urdu literature in post-Partition India and its impact on national politics. In Custody by Anita Desai highlights the impoverishment of the cultural and linguistic forms of Muslim identity […]

About a year ago, I wrote an article on majoritarianism in South Asia, which is feared as much as monarchism. Several well-meaning people—academics, writers, intellectuals, and opinion makers—are worried, rightly so, about the overwhelming victory of the BJP in the recent general elections in India. But wouldn’t it behove those opinion makers and intellectuals, some […]

Iam highly skeptical of the attempts of various political organizations to either communalize or demonize the notion of “Kashmiriyat” to serve their vested interests. The various communities in the state of J & K – Kashmiri Muslims, Kashmiri Pandits, Dogras and Ladakhis – have tried time and again to form a national consciousness in order […]

In conflict zones, particularly Kashmir, education can be deployed as an effective tool in intergenerational family communication regarding sociocultural trauma. As educators, we are in a position to mold students not just intellectually, but as functional members of families and communities as well. Education that aids in articulating traumatic experiences, understanding, and integrating such experiences […]

In conflict zones, particularly Kashmir, education can be deployed as an effective tool in intergenerational family communication regarding sociocultural trauma. As educators, we are in a position to mold students not just intellectually, but as functional members of families and communities as well. Education that aids in articulating traumatic experiences, understanding, and integrating such experiences […]

In January 1948 India referred the Kashmir dispute to the United Nations (Rahman 1996: 15-19). Prime Minister Nehru took the dispute with Pakistan over Kashmir beyond local and national boundaries by bringing it before the UN Security Council, and seeking a ratification of India’s “legal” claims over Kashmir. The UN reinforced Nehru’s pledge of holding […]

We inhabit a world that has been sinking further into the morass of political unaccountability and cultural repression after the gut-wrenching events of September 11, 2001. We have witnessed the fizzling out of the fragile Peace Pact in Palestine in 2003. We have witnessed the reduction of Afghanistan in Southwest Asia to a battlefield on […]