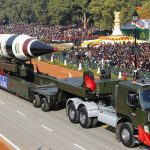 A war limited in terms of territory, objectives pursued, choice of weaponry, and avoiding use of weapons of mass destruction is widely regarded as a limited war. Since the nuclearisation of South Asia in 1998, the region’s security dynamics have changed so that a conventional war is increasingly likely to trun into a nuclear one. […]

There is a famous quote by Sun Tzu that ‘the supreme art of war is to subdue the enemy without fighting’. This aptly describes the effort in the on-going Indian hybrid warfare against Pakistan. The North Atlantic Treaty Organization has comprehensively defined hybrid warfare in their annual report titled Hybrid Threats: A Strategic Communication Perspective. […]