Wars are easier to start but difficult to end. It took the United States two decades to bring an end to the lingering Afghan war but it was only a matter of days that Kabul fell into the hands of Taliban. The war fatigue forced the Afghan forces to bow down before the warlords as […] 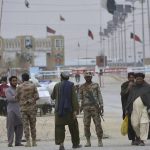 LAHORE: At least four US drone strikes hit the Pak-Afghan border last week, killing over two dozen people, including terrorists belonging to Taliban and Haqqani Network. The suspected missile strikes by the US drones had reportedly killed 20 militants in the southeastern border region between Pakistan and Afghanistan on Monday last week, while the second […]