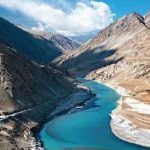 The Indus River, whose conventional name derives from the Tibetan and Sanskrit name ‘Sindhu’, is one of the longest rivers in the world, with a length of some 2,000 miles (3,200 km). It lies in the ranges and foothills of the Himalayas, the Hindu Kush, and the Karakoram. The Indus receives its most-notable tributaries from […]

After the Pakistan General Elections 2018, the upcoming government has revealed the broad layout of its policies through the victory speech and the inaugural address of the Prime Minister. It provides a clear focus on how to combat climate change and the much-needed foreign policy. The foreign policy mainly revolves around all of our bordering […]