The Indus River, whose conventional name derives from the Tibetan and Sanskrit name ‘Sindhu’, is one of the longest rivers in the world, with a length of some 2,000 miles (3,200 km). It lies in the ranges and foothills of the Himalayas, the Hindu Kush, and the Karakoram. The Indus receives its most-notable tributaries from the eastern Punjab Plain and provides the key water resources for the economy of Pakistan. 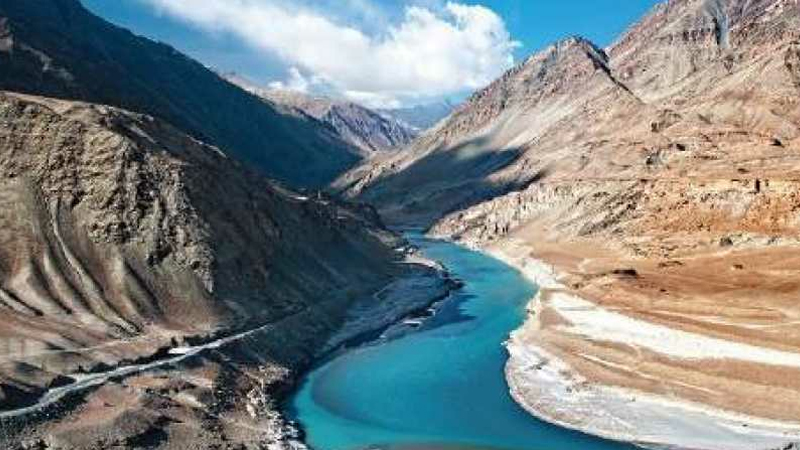 In present Pakistan, the emergence of an extensive network of perennial canals is playing its part in the economic development of the country, taking off from the Indus and its tributaries primarily in the area of Punjab and Sindh. These canals were constructed in the mid-1880s and were arid and barren land but now they have been transformed into an agricultural zone which is quite beneficial for Pakistan’s economy. Since the colonial days, the water in the Indus river been used as a weapon by the rulers to achieve their incentive.

Considering its importance, the Indus River has always been under the gun of historical clashes. One such conflict exists between Punjab and Sindh and they share the history over the Indus River dating back over a century when for the first time in 1901 conflict between the two provinces came to the fore. Punjab was prohibited that without the consent of Sindh, they are not allowed to take a single drop of water and these orders were passed by the then Indian irrigation commission. The next fire between the two provinces was ignited in 1919 when Punjab was not allowed to take any kind of project until and unless Sindh’s demands were fulfilled. Alongside with this, report of the then government of British India also demands the Sukkur barrage to be commissioned before any future endeavour. The request of Punjab regarding Thal canal from Indus was fiercely rejected by the Viceroy of India, Lord Reading in 1925. The reason behind this rejection was the deprivation of rights and fulfilment of demands that Sindh had to go through. However, Anderson Commission granted permission and in 1937 Punjab was permitted to pull back 775 cusecs of water on a trial premise from Indus for the Thal canal. In 1939, a formal complaint was lodged under the Government of India Act of 1935. Eventually, after two years, injustice to Sindh was recognised by Rao Commission and orders were passed for the construction of two new barrages in Sindh on the Indus side. The financial aid of Rs20 million was to be paid by Punjab to somewhat compensate their unjust behavior which they opted against Sindh for a long period of time. After this, a committee was formed under the order of Rao Commission. The committee consists of engineers from both provinces and they mutually agree on certain conclusion in 1945, which was given the name of ‘Sindh Punjab agreement’. This resolved the issue between the two provinces as nothing upstream could be built on Indus without the permission of Sindh as Sindh had supremacy over the Indus River basin according to the agreement.

The arrangement was continued after partition in 1947 until a landmark treaty “Indus Water Treaty” between two arch-rivals Pakistan and India mediated by World Bank was signed in 1960. Consequently, two mega-dams, Mangla and Tarbela, were constructed besides extension of the canal network, diverting water from the Indus to the eastern side of the country. To accommodate the massive structural changes in the system in the wake of the Indus Water Treaty of 1960 a new arrangement for water share among provinces became inevitable. Thus, in 1991 another significant event happened when a water apportionment accord was signed among four provinces, agreeing to the scheme of distribution of water among the provinces.

Despite the existing accord of 1991, Sindh remained skeptical about megaprojects on the Indus River. This is the reason that in 2018, in-spite of hype and support by the rest of the country over the construction of Basha dam Sindh raised concerns and questions that it might reduce the environmental flows downstream Kotri which over the last decade have already been significantly reduced. Unfortunately, Sindh’s stance has always been considered frivolous over their concerns to environmental flows, ship breaking industry, and mangrove forests degradation. It is quite evident from the historical events over the last hundred years that Sindh has a point and Punjab must pay heed to their concerns that are backed by historical events.

Inter-Provincial water conflicts are causing crucial problems for the country. Therefore, certain measures need to be taken to settle this issue. The available resources need to be utilised reasonably by the Federal and Provincial governments. While doing this, the flow of the Indus River System (IRS) water shouldn’t be averted and distressed. Another major concern is the use of multipurpose projects because they are depriving people of their indigenous assets. The need of the hour for the Pakistani establishment is to be vigilant and take notice regarding the management of their water resources rather than going for ceaseless multipurpose development over the IRS. Apart from this, a considerable amount of work needs to be done to improve the water management infrastructure to store rain and regulate the floodwater. In the past, this management infrastructure was exposed when the barrages like Taunsa failed to meet the challenge of controlling floodwater during the 2010 floods.