The writer has authored Bangladesh Liberation War, How India, U.S., China and the USSR Shaped the Outcome

India has just set an example of how a nation can retreat into darkness, with its Supreme Court ruling on Saturday that a Hindu temple be built to honour fictitious God Ram on the disputed site of a historic 400-year-old Muslim mosque, named after the first Mughal emperor. The top court agreed with Hindus that […] 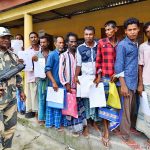 For more than a hundred years, the ratio of Hindu population in the Indian subcontinent has been declining. The dip, from 75.1 percent in 1881 to 72.9 percent in 1901, in British India created a paranoid reaction that Muslims would outnumber Hindus. This myth has been repeated after every census ever since.The share of Hindus […]

By pursuing a populist ultra-nationalist agenda, Prime Minister Narendra Modi has unwittingly validated the much-maligned “two-nations” theory that formed the rationale behind dividing British India to create Pakistan as a Muslim homeland. His policy pits Hindus against Muslims, an unfortunate schism that all of his predecessors fought against. Seven decades after the blood-soaked partition, hyper-nationalist […]

India’s migration politics–an assertion that there are 40 million Bangladeshi migrants illegally living in India and that they must be pushed back–will morph into an explosive crisis in South Asia and destabilise the region. This is how things will unravel: India’s looming campaign to round up suspected illegal migrants and put them in now-under-construction concentration […]

Yet another denigration of Prophet Mohammad (PBUH) in the name of freedom of expression has been attempted. Yet another violent outburst in the Arab world has taken place. More deaths and destruction. When can we expect this to end? Not until the west comes to its senses. Not until the licence Dante used to burn […]