* 'On this beautiful occasion of @farhan_saeed aka Hamza's birthday we made this little present for our mere humsafar fam,' Aamir captioned the Instagram reel 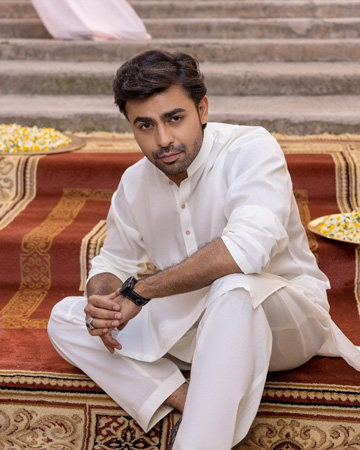 The birthday celebration video of showbiz A-lister Farhan Saeed from the sets of ‘Mere Humsafar’ goes viral on social media.

On her account of the photo and video sharing application, Wednesday, the ‘Mere Humsafar’ star shared a sneak peek of the birthday celebration of her co-star and Pakistan’s heartthrob, Farhan Saeed, who turned 38 yesterday.

“On this beautiful occasion of @farhan_saeed aka Hamza’s birthday we made this little present for our mere humsafar fam,” Aamir captioned the Instagram reel, which sees the introduction of each of the cast members of the trending serial on the tune of Shahrukh Khan’s song – the title track of Bollywood movie ‘Om Shanti Om.’

The viral video, watched and loved by millions of followers of Hania Aamir, garnered immense love for the ‘Mere Humsafar’ duo aka ‘Halza’.

Have a glimpse at some of the comments on the post.

Cutest video of the day

You made our day?

The birthday boy also dropped a red heart in the comments section.

The family play is one of the hottest shows of this season, with millions of YouTube views on each of the episodes. The massive fanbase of the serial is not limited to Pakistan and is a top trending Pakistani drama in multiple countries including India, Bangladesh and Nepal.

The second last episode of ‘Mere Humsafar’ will air in prime time tonight on ARY Digital.