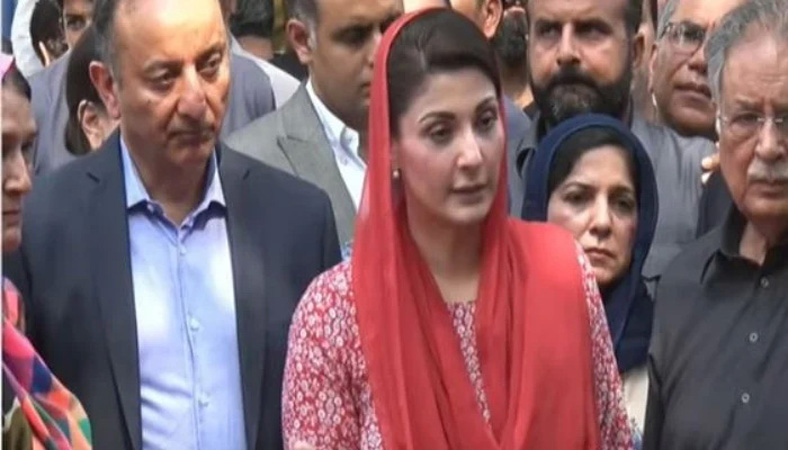 Talking to journalists in the federal capital, Maryam said that Khan rules two provinces and cannot escape by holding the federal government responsible for everything. She accused Imran Khan of receiving foreign funding to damage national politics and moral values. “Imran Khan was launched to destroy the youth’s future, undermine country’s economy and all the national institutions should take note of Imran’s deception,” Maryam Nawaz said while talking to the media outside the Islamabad High Court.

Lambasting Imran Khan for politicking in the trying time, she said the PTI chief was visiting flood affected areas just for the sake of “photo shoot” and for his joyrides that too on the state resources. On the other hand, she said Prime Shehbaz Sharif visited every province to listen to the grievances of flood affectees despite the fact that his party did not have any provincial government.

“Imran Khan is not a stakeholder in the country as he was funded by the country’s enemies to destroy the country,” she remarked. She said time needed to stabilise economy as the country was only doing firefighting at the moment. The coalition government had saved Pakistan from default, she added. Maryam was questioned regarding PML-N leader Javed Latif’s comments a day ago accusing the PTI chief of “attacking the basic principles of Islam” by “supporting” the Ahmediyya community during his tenure.

Latif’s comments had prompted a response from the PTI who in turn had lambasted the coalition government – particularly the PML-N – for “using religion to instil and spread hatred” against Imran. Maryam avoided directly commenting on Latif’s comments and instead said she was against using or involving religion in politics, or for personal interests. “Using religion for your personal motives is very bad. I have suffered this and am a victim. Ahsan Iqbal received a bullet and they flung mud at Nawaz Sharif as well.”

She alleged that Imran used to frequent rallies and sit-ins where the above were accused of disrespecting religion. Maryam further claimed that the PTI had run its by-election campaign in Lahore’s NA-120 in 2017 “on the basis of religion”. “The party they used for religion and whose rallies they attended, they themselves shot at when their own government came [to power],” she added. “I think religion is a personal matter … but it does not remain a personal matter when you say in rallies that ‘voting for PML-N is a sin and voting for me (Imran) is righteous and if my party members switch loyalties then it’s shirk’.”

Maryam came down hard on Imran for what she said was his “changing definitions” of religious terminologies. “Shirk’s definition is associating partners with God. Are you changing the entire dictionary and the meaning of religion for your disgusting politics? “If this is shirk, according to you, then you are the biggest committer because you admitted in TV interviews that ‘I used the establishment to bring people in my government for voting’,” she said.

She also mentioned other examples of Imran allegedly invoking religion during political rallies and said it was a “matter of concern” for her as a mother because of the message that was being sent to the youth. “My problem, as a mother, is you don’t use the name of religion and don’t try to pervert people’s religious beliefs because you should speak responsibly when you speak on a mic.”

Maryam further criticised the former prime minister for his comments regarding Additional District and Sessions Judge Zeba Chaudhry and said only a “mentally unsound” person or someone who was “launched to cause destruction” could say such things. “I think all institutions, whether the judiciary or army or politicians or government, should acknowledge he is a fitna (chaotic miscreant) who was launched for destruction and from whom no one is safe.”