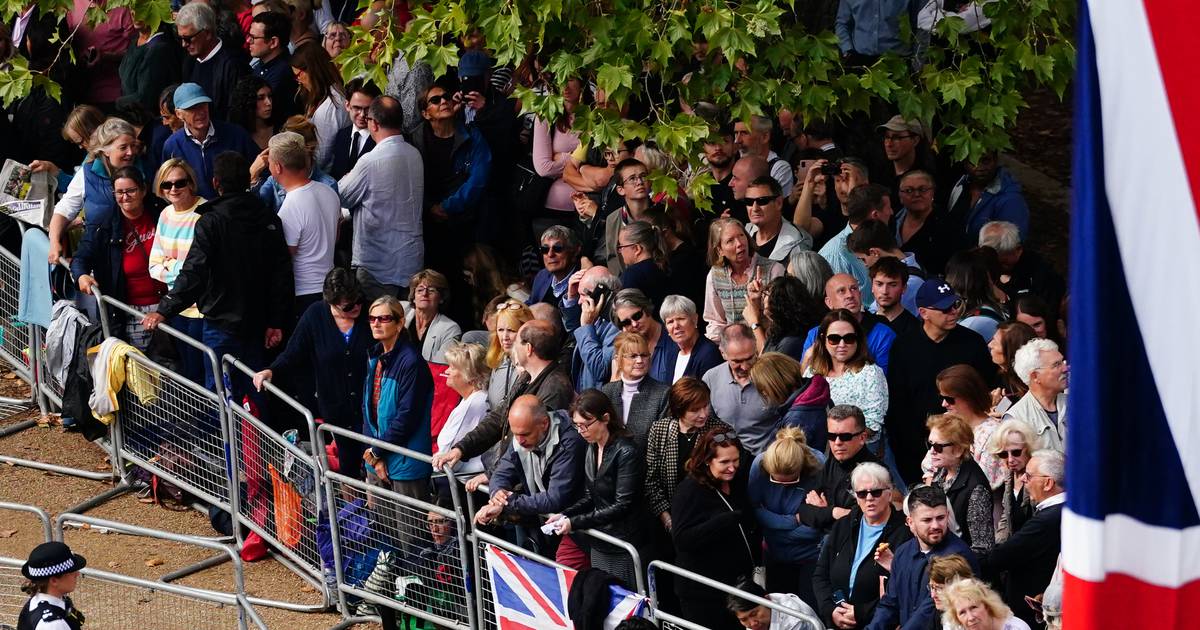 London: Tens of thousands of mourners, some waiting through the night, queued for hours Thursday to pay their last respects to Queen Elizabeth II on the first full day of her coffin lying in state.

Britain’s longest-serving monarch, who died a week ago aged 96 after 70 years on the throne, is at rest in Westminster Hall ahead of Monday’s state funeral at neighbouring Westminster Abbey.

After lining up for two days, the first public mourners were allowed into the vast mediaeval hall late Wednesday afternoon, following the coffin’s ceremonial procession through the packed streets of central London from Buckingham Palace.

Since then, a steady stream of people has continued to file past the queen’s casket, with thousands waiting through the night for their chance to say farewell to the country’s figurehead.

Her casket, mounted on a platform, is draped in the Royal Standard flag and bearing the Imperial State Crown plus her ceremonial Orb and Sceptre, with tall, flickering candles standing at each corner.

“It was very beautiful, moving,” said Sarah Mellor, noting it was also very quiet inside the cavernous hall, the oldest part of Britain’s centuries-old parliament. “There is the sense of history here,” added the visibly moved Mellor, who had queued for seven hours.

The sombre atmosphere was completed with guards in ceremonial uniform posted around the podium in a constant vigil. One fainted overnight, in a sign of the toll standing vigil can take.

All Britain’s national newspapers carried poignant pictures of the historic scene on their covers. “Nation’s turn to say farewell,” the Daily Telegraph headlined on its front page.

Mourners marked their moment in front of the coffin in various ways, from bows or curtsies to the sign of the cross or by simply removing their hats. Some wiped away tears with tissues.

Others brought infants in pushchairs. Old soldiers stopped and gave one last salute to their former commander-in-chief. The coffin had been taken to parliament from Buckingham Palace Wednesday to the strains of a military band playing funeral marches.

King Charles III led the royal family in procession behind a horse-drawn gun carriage bearing the casket. Parliament’s Big Ben bell tolled out each minute as the casket passed in front of hushed crowds lining the route, ahead of the lying-in-state beginning at 5:00 pm (1600 GMT).

By late morning Thursday, the queue had grown to 3.5 miles (5.6 kilometres) along the south bank of the Thames river, with people set to wait through the day to see the late sovereign.

Organisers have prepared up to 10 miles of queuing infrastructure, with expectations hundreds of thousands will participate, in particular over the weekend. Musician Jacqui Smith, among those in line overnight, was sad but enthusiastic about the reign of the new king. “I’ve been waiting for it for a long time,” she told AFP from Lambeth Bridge, within sight of Westminster Hall. “I love the queen, but I’m a real Charles fan.”

After nearly 110 hours lying-in-state and 10 full days of national mourning, the commemorations for the queen will culminate with her state funeral Monday. Before that, senior royals are continuing to visit places around the country.

On Thursday, William and wife Kate travel to Sandringham, the family’s private winter retreat in eastern England to view the floral tributes left by members of the public at the Norwich Gates.

Charles, 73, was crowned Prince of Wales by his mother in 1958 and on his first full day as monarch Friday bestowed the title on his eldest son. The historic title has been given to the heir apparent since the start of the 14th century.

Thursday’s visit will be the first official engagement conducted by the new Prince and Princess of Wales. Meanwhile Elizabeth’s youngest son Prince Edward, 58, and his wife Sophie, visit Manchester in northwest England to view the civic book of condolence at the city’s central library.

They were also viewing the floral tributes in St Ann’s Square and meet members of the public who are volunteering at the site, and light a candle in memory of the queen at Manchester Cathedral.

The late monarch’s elaborate funeral will see hundreds of world leaders and global royalty pack the historic Westminster Abbey in the heart of the British capital.