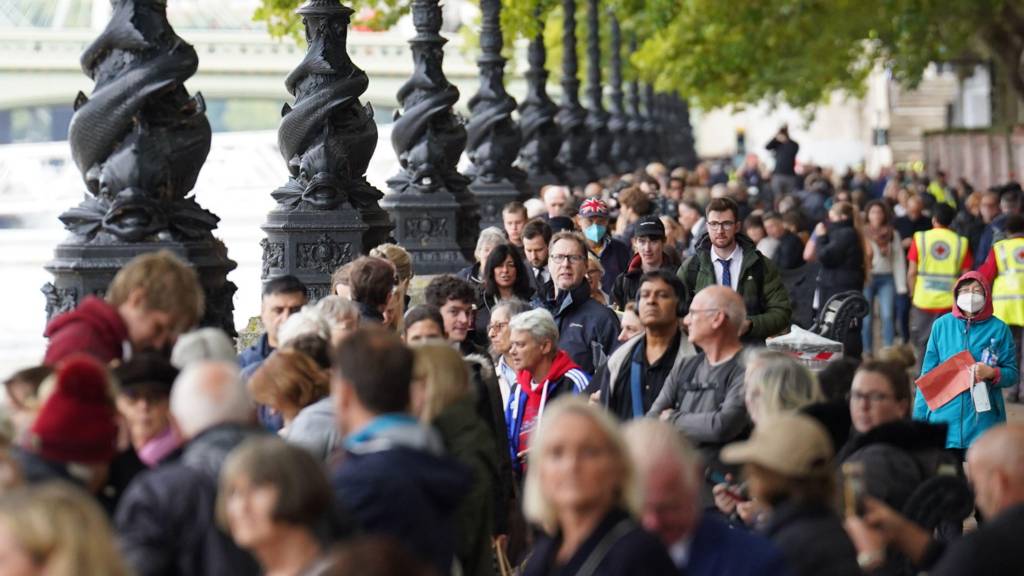 London: King Charles III leads a procession of the coffin of his mother Queen Elizabeth II through London on Wednesday, before hundreds of thousands of people pay their final respects.

Six days after her death in Scotland, Queen Elizabeth’s body will be borne on a horse-drawn gun carriage from her Buckingham Palace home for the final time to Westminster Hall, where she will remain for four full days until her funeral Monday.

The king, his heir Prince William and younger son Prince Harry will walk in silence behind the gun carriage as it winds through the capital’s streets in a 38-minute journey to the cavernous 12th-century hall in the Westminster parliament.

The sight will inevitably evoke memories of 1997, when William and Harry, then aged just 15 and 12, walked, heads bowed, behind the coffin of their mother, princess Diana.

But it comes with the once-close brothers now reportedly not on speaking terms, after Harry’s move to the United States. The public, some of whom began queueing on Monday, will begin filing past the coffin from 5:00 pm (1600 GMT), with mourners already warned they will face an endurance test to wait in lines that could tail back five miles (eight kilometres).

Hundreds of people were already queueing at around 8:20 am (0720 GMT) with those at the front having spent the night equipped with blankets, camping seats, a tents and rain ponchos.

As day broke, a steady stream of mourners joined the back of the queue along the River Thames under the watchful eye of an army of stewards in fluorescent jackets.

“The night was quite wet, cold and wet, but I got a little chair and a big umbrella so I kept fairly dry,” Dan Ford, a 52-year-old retired police officer, told.

Brian Flatman, 85, said there was “no way” he would pass up the chance to pay his respects having missed the queen’s 1953 coronation. “I was 16, we got there before midnight, Hyde Park Corner, superb position, but very quickly I became suddenly ill and had to crawl all the way to South London,” he recalled. “This time there is no way I can miss that.

I will dedicate a few seconds there (by the coffin) to her life of dedication. What an example.” Strict rules and airport-style security measures have been put in place, with “far more” people expected than the 200,000 who filed past the coffin of the queen’s mother when she died in 2002, according to Prime Minister Liz Truss’s spokesman.

The government has advised people to wear “suitable clothing” and to bring portable battery packs to keep their mobile phones charged an indication that some people will need to wait overnight for a glimpse of the casket.

Hotel rooms in the British capital are increasingly hard to find, with even budget rooms going for £300 ($350) per night, while transport bosses and police are under pressure to keep the city moving and safe in exceptional circumstances.

“It’s a massive challenge for the Metropolitan Police and for me personally, but we have been preparing for many, many years,” the newly appointed head of the London police force, Mark Rowley, told Sky News on Tuesday.