Deprived women in flood and matter of menstrual hygiene in Umerkot

Umerkot (September 13, 2022): The catastrophic floods in Pakistan have destroyed homes and indigenous life. People have lost their homes and livelihood. More than 33 million people are affected by the floods. Almost half of them are girls, women and all menstruating individuals. Many will be menstruating during this crisis with little to no resources.

Due to climate change, Pakistan has experienced excessive rains this monsoon season. It is 2.87 times higher than the national average of the last 30 years affecting areas in Sindh and Balochistan receiving more than five times the average rainfall.

During evacuation, dislocation or relocation, menstrual products are unavailable. Unavailability of resources results in extended use of soiled products or bloodstained clothing. Menstruating individuals are currently using leaves, plastic bags, damp rags, damp newspapers and many other unhygienic materials. These can lead to infectious diseases. These unmet menstrual health needs also become a source of shame, self-consciousness and embarrassment for those menstruating. They are often at the receiving end of abuse and violence. 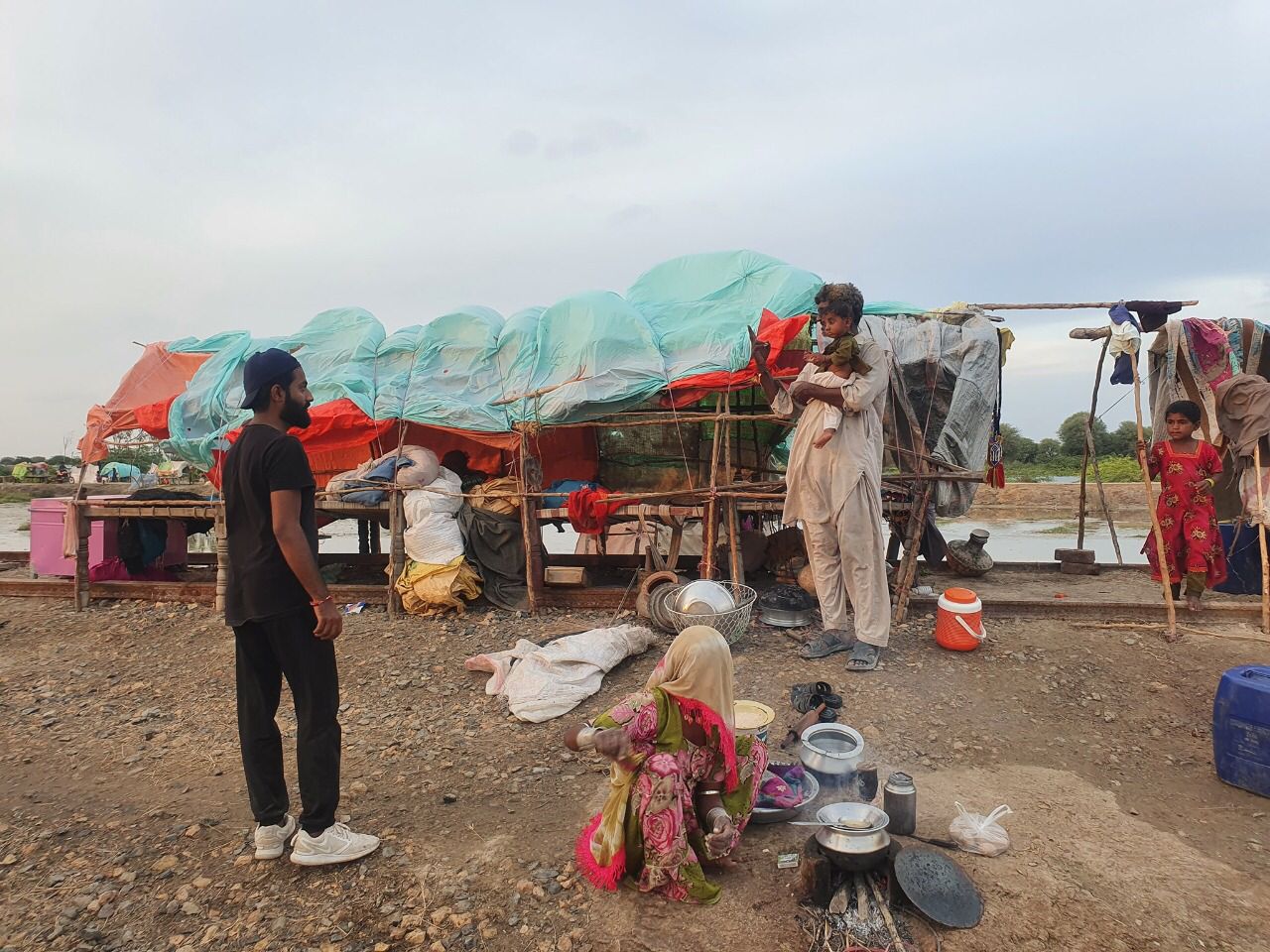 According to the report of PDMA in Umerkot district, 76,398 families have been affected in the recent floods. 4,923 of the affected people have been accommodated in 32 relief camps set up by the government. The relief provided is no match for the devastation and the number of people affected by it.

Benish Muneer is an activist and working around the clock to send menstrual products and supplies flooded in district Umerkot. She is working in partnership with various civil society organizations and social activists to ensure menstruators have appropriate products during this crisis including HANDS Pakistan as a District Project Manager and Rotaract Club. ‘We work closely with partners and local leaders on the ground to find out what menstruating individuals need. We are listening to the people we are serving.’ She says.

Benish added that they held meetings with the affectees. Most of the families migrated from their native villages since the flood affected their homes. They have temporarily shifted them to safe spaces and some are living under the sky, even during the rain. Women affected by the floods demand that they need sanitary menstrual products.

‘If the argument is that women in rural areas who are in relief camps right now don’t know how to use pads. It is not difficult to teach them through volunteers. We don’t know how many of them already use pads, so let’s not deprive them of menstrual hygiene products because of what we assume might be an issue.’ Benish expressed.

Sakina Abdul Ghafoor evacuated her family from Soofi Faqeer to Chachro Road Umekrot to stay safe during floods. She said that menstruation doesn’t stop during climate emergencies. While our village is severely struck by floods, women affected by this climate crisis suffer from inadequate access to menstrual supplies. People distributing ‘daal-rooti / daal-chawal’ is good but putting sanitary pads in ration bags will not damage their dignity.

‘Flood victims are facing many difficulties, we don’t even have dry clothes, during certain days of menstruation. We are facing a lot of difficulties. Understanding the problems of women is not common practice here in our area. One would expect men to be more sensitive at a time like this when the majority of our country is under water; hundreds of people have lost their lives and livelihoods and are now vulnerable to life-threatening diseases. It is clear that not every individual is aware of the basics of a woman’s anatomy’. Flood affectee Parvati Poonjo from taluka Pithoro said with tears in her eyes.

Dr Komal Shardha visited the relief camps and organized medical camps voluntarily for the flood-affected women and children. She shared that the contribution of locals in menstruation-related discrimination and tabooing vaginal bleeding does not only prevent women attain satisfactory enjoyment of their basic human rights but also, it gives birth to many unfortunate vistas like unawareness about the matter even among girls themselves. It heightens the threat of infections, raises the ratio of absenteeism and ultimately undermines the participation of women in public spaces.

She added, that humanitarian crises and homeless shelters are other factors that add to the list. A glimpse of this is visible among the flood-affected women in Umerkot. Besides the failure to access the basic needs of life, females have lost their access to menstrual hygiene products too. A woman’s menstruation doesn’t stop, even if a great part of the land is underwater. The flood situation has disproportionately impacted the females’ menstrual health and it is extremely devastating and humiliating to witness them being in clothes covered in blood.