Bringing the rich under tax net to uplift the poor: President 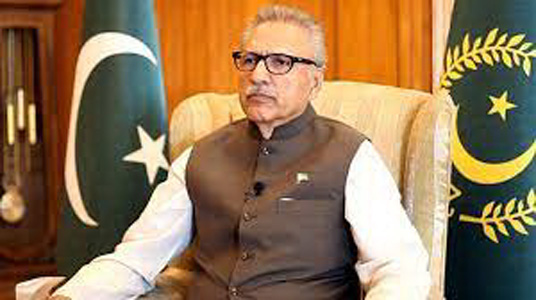 President Dr Arif Alvi here Monday said that economic prosperity of the country was linked with increasing tax collection and underlined the need for bringing rich people under tax-net to economically strengthen the poor segment of the society.

Addressing an awareness seminar regarding role of Federal Tax Ombudsman (FTO) Office for provision of prompt, quick and free justice to people at their doorsteps, the President said that in world, the state was responsible for providing uniformed education, quality health services and jobs on merit to people and it was only possible when well-off people were brought under the tax network by simplifying tax collection procedures.

The President said the states often resort to impose indirect taxes on alternate products like gasoline and other expensive consumable items when the majority of people were reluctant to pay taxes due to the complicated tax system. “If we compare the newspapers of 1950 and the one being printed today we would find well-off people always seeking to defer taxes owing to complex and lengthy procedures of tax collection,” the President said.

Emphasizing upon building the confidence and trust of the people, he noted that most people were reluctant to pay taxes as they fear to be bothered by tax departments from time to time. In this situation, he said, the responsibility of the Federal Tax Ombudsman (FTO) increases as according to the law the FTO has to decide the tax related complaints against federal tax authorities within 60 days of time. The President expressed satisfaction that most of peoples’ complaints were being addressed by FTO.

Countering smuggling, money laundering and finance related white collar crimes were among the major challenges of the present era, the president said, “We have to go towards speedy adaptation of digital technology for financial transparency and curbing these social evils.” Dr Arif Alvi said today was an era of capitalism and most of poor countries were looking towards international monetary institutions for loans, adding Pakistan has all the resources that need to be exploited for the well being of masses and increase tax collection to bridge the rich-poor gap.

Instead of confrontation, the President said we have to bring more well-off people under tax-net through a friendly and cooperative approach to get rid of obsolete tax culture and foreign loans. Dr Alvi said the President secretariat was speedily disposing tax related complaints/cases and no delay being done in this regard. He said that alternative dispute resolution councils (ADRC) exist in almost all the developed countries like England and the FTO role was very important for quick dispensation of justice. The President underlined the need for more outreach of the federal tax ombudsman and creation of awareness about this office for facilitation of taxpayers and complainants. Acting Governor KP, Mushtaq Ghani while expressing gratitude to the President for addressing FTO seminar despite his hectic schedule said that tax collection in KP has been increased to record Rs30 billion against Rs10 billion recorded before, adding reforms in tax collection were imperative to increase tax base.

Dr Asif Mahmood Jah, Federal Tax Ombudsman while referring to his department’s performance and various decisions in tax related cases said that the importance and effectiveness of the institution was increasing day by day due to trust of taxpayers and people. “We do not wait for our mandatory sixty-days period rather resolve problems of complainants in days, hours and even through a phone call,” he said and urged the taxpayers to immediately contact FTO if they have any grievances with tax administration or their legitimate issues were not being resolved. To facilitate taxpayers, five new FTO stations were established in different cities in the country, he mentioned. It is to mention here that in 2021, FTO received as many as 3371 complaints and decided 2867, while the FBR’s acceptance response to FTO’s recommendations/decisions was 88percent.

Besides letters and emails, Dr Asif said people can contact FTO through a mobile app and whatsapp for quick resolution of their complaints. The seminar was attended besides others by members of Sarhad Chamber of Commerce and Industry, tax officers, traders, FBR officials and other segments of the society.