Afghan Women Forced married by Taliban Spokesman: Sexually and physically Abused. Taliban’s abduction of unmarried women from their homes at gunpoint and forcibly marrying them is prominent. Girls are at risk of child marriage in Afghanistan. In the past year, many reports of Taliban commanders and members marrying for the second and third time have surfaced on social media in Afghanistan.

Accusation on Former spokesperson of Taliban interior ministry Saeed Khosty of forcibly marrying and rape of medical student Elaha. She is daughter of a former general in the National Security Directorate, the former Afghan government’s intelligence agency. Elaha’s video is viral over social media in which she cries and exposes the atrocities of Saeed Khosty. Elaha was a medical student in Kabul. Videos of Elaha are on Aamaj News.

Elaha is currently in an apartment in Gulbahar Center. She cannot leave the building. Gulbahar center is a shopping mall and apartment complex which is located in District 1 of Kabul and is in close proximity of the Taliban’s intelligence headquarters.

Elaha tried to escape from Afghanistan several times to save herself, but was detained escape by the Taliban officials at the Torkham border. she was in prison and was asked to kiss Saeed Khosty’s feet for an apology for escaping. The Taliban renewed her marriage with Qari Saeed Khosty.

Although it is not clear when the message was recorded. However, it seems that this video was recorded after the removal of Khosty as the spokesperson of the Taliban’s Ministry of Interior.

She said that Qasir Saeed Khosty married her forcibly in February 2022 at the Taliban intelligence directorate. He used to beat her mercilessly. Elaha shows her bruises in the video . Said Khosti beat me a lot. Every night he raped me.  The victim pleaded to be rescued and said these may be my last words. She tells that she might not be alive after this video. She says “it is better to die once than to die every day.”

In another video, Qari Saeed Khosty has been seen entering Elaha’s house forcibly. Elaha yells at him to leave her house. However, Qari Saeed is seen to be intimidating her with his armed men. Elaha tries to defend herself with a shovel in the clip.

In another video clip, it seems that Elaha is in a hospital due to injuries and her screams could be heard. 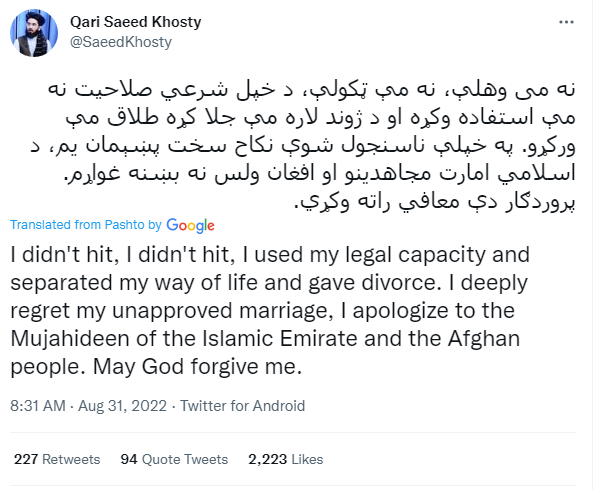 Qari Saeed Khosty has tweeted a thread for explanation: “6 months ago, I married a girl named Elaha at her request, after that I saw that she has a problem of faith. I tried to correct her beliefs through advice and discussion. But, it didn’t work.”

Qari Saeed Khosty: “I didn’t hit. I used my legal capacity and separated my way of life and gave divorce. I deeply regret my unapproved marriage. My appologies to the Mujahideen of the Islamic Emirate and the Afghan people. May God forgive me.”