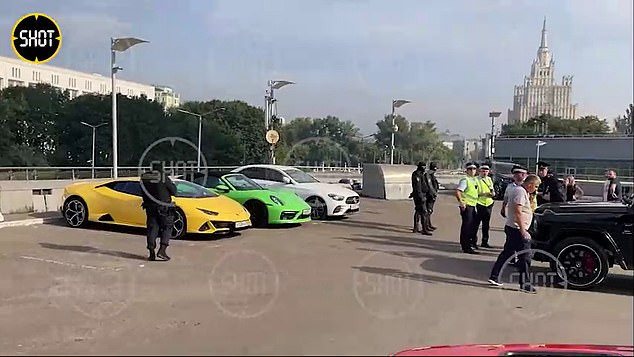 Elite Russian Supercar owners brutally detained. Dozens of car owners were brutally detained by armed police. Videos from Moscow showed the flashy cars roaring through Russia’s capital. Dozens of men were in the custody of the Russian police. Russian Police arrest owners of flashy supercars. As they take part in car racing while the country engages in war with Ukraine. A foreign news agency states that arrests are because of the death of their soldiers in the Ukraine war.

Rally organizer Alexei Khitrov, a 28-year-old cryptocurrency millionaire, has said: ‘The goal of this event is to gather all elite car owners and create an atmosphere for networking.’

Vladimir Putin is popular for his rage against Russian multi-millionaires. Putin gets furious at scions who ostentatiously display their riches in front of the masses.

“Seven men were ordered to serve as many as 15 days in detention for participating in a “mass gathering of citizens in a public place,” TASS reported.

He once said: ‘In Soviet times, some people used to flaunt their wealth by implanting gold teeth, ideally front teeth, in order to demonstrate the size of their fortune.’

Addiotionally, ‘Lamborghinis and other expensive toys are exactly those gold teeth.’

Drivers intended to parade their cars in central Moscow with ‘Rich and Successful’ stickers. Moreover, Tickets for the unofficial rally cost up to £4,200. It includes breakfast and an afterparty, but cops smash it before it gets properly underway.

One seized by police was Oscar Liksutov, 17, son of Maksim Liksutov, head of the Moscow Transport Department. But, he was escorted to the home of the top city official.

Seven men to serve as many as 15 days in detention for participating in a “mass gathering of citizens in a public place.” TASS reported.

Alexander Donskoy among the people taken into custody for taking part in the ‘Rich and Successful’ rally in the city.