‘Third’ of Pakistan under water as flood aid starts pouring in 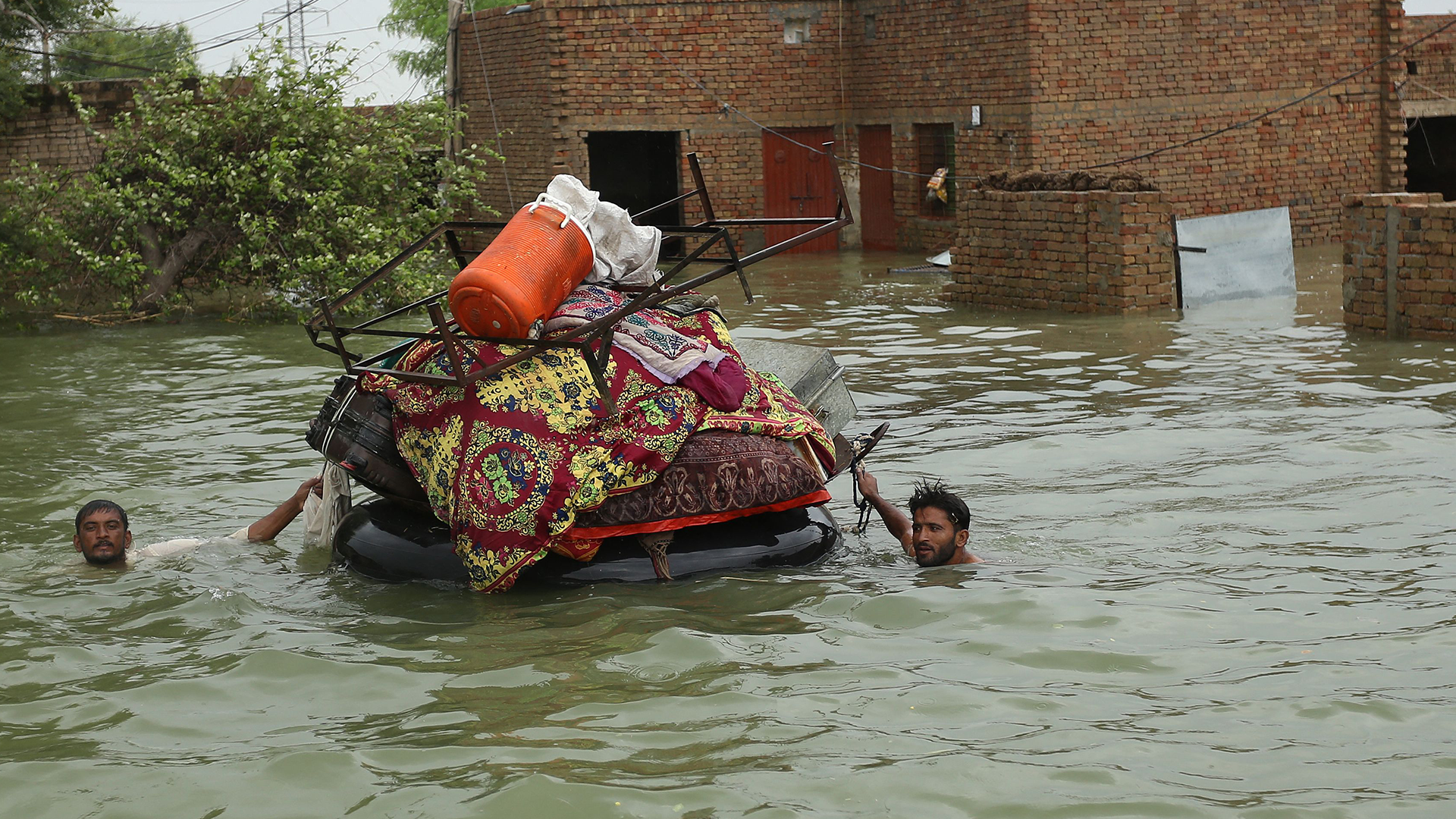 ‘Third’ of Pakistan under water as flood aid starts pouring in:

Aid efforts ramped up across flooded Pakistan on Tuesday to help tens of millions of people affected by relentless monsoon rains that have submerged a third of the country and claimed more than 1,100 lives.

The rains that began in June have unleashed the worst flooding in more than a decade, washing away swathes of vital crops and damaging or destroying more than a million homes.

Authorities and charities are struggling to accelerate aid delivery to more than 33 million people affected, a challenging task in areas cut off because roads and bridges have been washed away.

In the south and west, dry land is limited, with displaced people crammed onto elevated highways and railroad tracks to escape the flooded plains.

Pakistan receives heavy — often destructive — rains during its annual monsoon season, which are crucial for agriculture and water supplies.

But such intense downpours have not been seen for three decades.

Pakistani officials have blamed climate change, which is increasing the frequency and intensity of extreme weather around the world.

“To see the devastation on the ground is really mind-boggling,” Pakistan’s climate change minister Sherry Rehman told AFP. “When we send in water pumps, they say ‘Where do we pump the water?’ It’s all one big ocean, there’s no dry land to pump the water out.”

She said, “literally a third” of the country was under water, comparing scenes from the disaster to a dystopian movie.

“Massive damage has been caused… especially in the areas of telecommunications, roads, agriculture and livelihoods,” he told AFP Tuesday.

The Indus River, which runs along the length of the South Asian nation, is threatening to burst its banks as torrents of water rush downstream from its tributaries in the north.

Pakistan as a whole had been deluged with twice the usual monsoon rainfall, the meteorological office said, but Balochistan and Sindh provinces had seen more than four times the average of the last three decades.

The disaster could not have come at a worse time for Pakistan, where the economy is in free fall.

Appealing for international help, the government has declared an emergency.

Aid flights have arrived in recent days from Turkey and the UAE, while other nations including China, Canada, Australia and Japan have also pledged assistance.

The United Nations has announced it will launch a formal $160 million appeal on Tuesday to fund emergency aid.

Pakistan was already desperate for international support and the floods have compounded the challenge.

Prices of basic goods — particularly onions, tomatoes and chickpeas — are soaring as vendors bemoan a lack of supplies from the flooded breadbasket provinces of Sindh and Punjab.

There was some relief on Monday when the International Monetary Fund approved the revival of a loan programme for Pakistan, releasing an initial $1.1 billion.

Makeshift relief camps have sprung up all over Pakistan — in schools, on motorways and in military bases.

In the northwestern town of Nowshera, a technical college was turned into a shelter for up to 2,500 flood victims.

They sweltered in the summer heat with sporadic food aid and little access to water.

“I never thought that one day we will have to live like this,” said 60-year-old Malang Jan.

“We have lost our heaven and are now forced to live a miserable life.”

Makeshift camps have sprung up all over Pakistan — in schools, along motorways and at military bases — to give shelter to millions of displaced flood victims.

But the relief at finding safety can turn to desperation for many.

In the northwestern town of Nowshera, a technical college was turned into a shelter for up to 2,500 flood victims, who sweltered in the summer heat with sporadic food aid and little access to water for bathing. 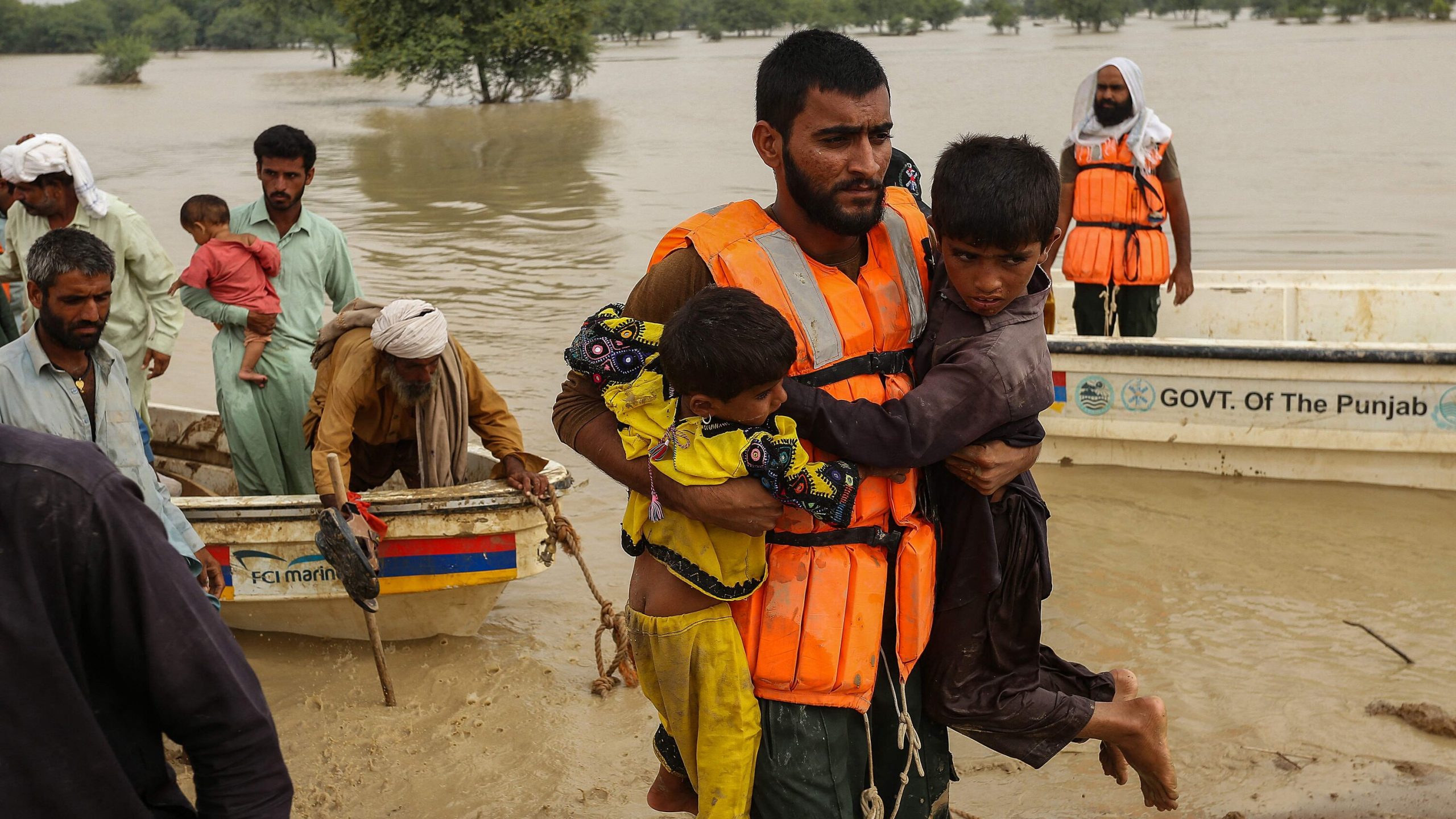 “We have been only eating rice for the past three days,” 60-year-old Malang Jan told AFP.

“I never thought that one day we will have to live like this. We have lost our heaven and are now forced to live a miserable life.”

Jan’s family were rescued by boat when his home was submerged in the floods that have swamped a third of the country, killing more than 1,100 people and affecting tens of millions more.

The college gardens are lined with tents — the classrooms are filled with the families who arrived first and grabbed the chance for privacy.

Others rest shoulder-to-shoulder in corridors with their meagre bundles of belongings.

Goats and chickens salvaged from the rising water graze in the campus courtyard.

The camp of 2,500 is managed by various charities, political parties and administrative officials overwhelmed by the scale of the disaster.

“It’s a situation of panic,” said Mushfiq ur Rehman, a district court official who stepped in to oversee food delivery for the local administration.

“There is enough food, but people are getting desperate because they don’t trust if they will get a meal again or not.”

It is particularly difficult for women in this deeply conservative region of the country, where the all-covering burqa is commonly worn, and women rarely mix with men who are not relatives.

“We are Pashtun people; we don’t come out of our homes often, but now we are forced to come out,” said Yasmin Shah, 56, who is sheltered in a classroom with her family.

Young women with burqas pulled up over their heads watch from upper floors.

“I cannot come out of this classroom unless I have to,” added another, looking after a blind uncle.

Older women take their place in queues to ensure they get a share of food handouts.