US leaders express solidarity with flood victims in Pakistan

We stand with Pakistan at this difficult hour: US State Department Counselor Derek Chollet
Senator Jim Risch sympathizes with flood victims, families and affectees.
Congresswoman Sheila Jackson Lee writes to US President for immediate provision of assistance to the flood victims. 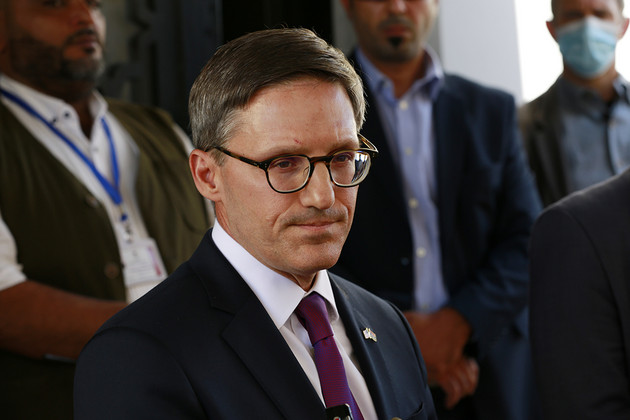 Matters related to Pak-US bilateral relations with a special focus on promoting trade and investment ties and people-to-people exchanges came under discussion during the conversation.

The situation in neighboring Afghanistan was also discussed.

Ranking Member of the US Senate Foreign Relations Committee Senator Jim Risch also expressed his sympathies with the flood victims.

In his tweet, Senator Risch said, “My thoughts are with Pakistan as it contends with deadly and devastating flooding. Vicki and I are praying for the victims, their families, and all those affected by this disaster.”

Ambassador Masood Khan expressed his gratitude to Senator Risch for his message of sympathy to the people of Pakistan as they deal with devastating floods. Other US leaders including Senator Ted Cruz and Congresswoman Sheila Jackson Lee have also expressed their sympathies with the flood victims.

Pak Ambassador to the United States is visiting Michigan, New York, and Chicago where he is meeting US leadership, businessmen, and the Pak-American community to solicit their support for the flood victims in Pakistan.

The Ambassador has also written letters to US Senators and Congressmen sensitizing them about the widespread devastation caused by the floods and seeking their support for relief, rescue, and recovery operations.

In New York, the Ambassador participated in a fundraiser organized by the Association of Physicians of Pakistani Descent of North America (APPNA) and called upon them not only to donate generously but also to use their influence and reach out to the US leadership and Pak-American community in securing support for the victims of the unprecedented flood.

Masood Khan also participated in the Pakistan Independence day Parade held in New York where he made an impassioned appeal to Pakistani American community for helping their Pakistani brethren who were left to the mercy of nature by the recent floods.

Mayor New York Eric Adams speaking on the occasion expressed his deep sympathies with the flood victims. “We should keep in mind those families in Pakistan right now who are experiencing the devastation of the flooding”, stated Mayor New York in his address to the Parade.

The Ambassador highlighted education, agriculture, health, and most important tech sector, as game changers, where there existed huge opportunities for the business community of the two countries to forge win-win partnerships.

Ambassador Masood Khan also met members of the Pak-American community in Chicago and urged them to step forward and help their brothers and sisters who were undergoing the trauma of devastation and needed immediate attention in meeting their basic needs including food, shelter, and medical care.

During his meeting with Mayor Glendale Heights and the local leadership, the Ambassador called upon them to mobilize Pakistani American community for helping the flood victims.

“Pak-American community has not only been making huge contributions towards strengthening Pak-US ties but has always been at the forefront in responding to any call for help from Pakistan. We count on your support at this difficult hour”, said Ambassador Masood Khan during his meeting with the members of the Pak-American community in Chicago.