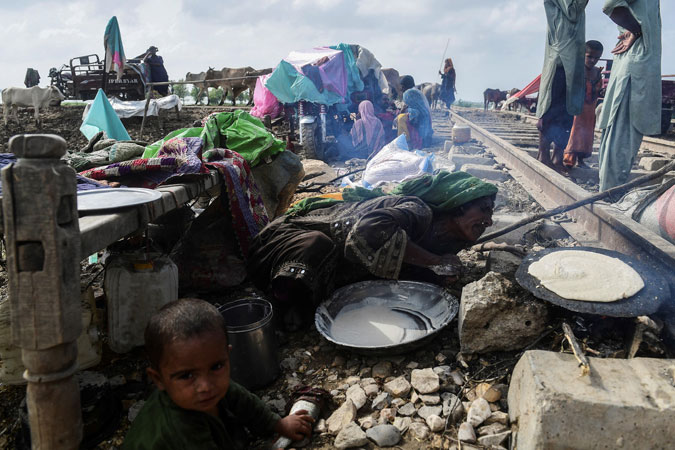 Incessant monsoon rains and floods raging across the length and breadth of Pakistan have led to an acute humanitarian crisis that has set the alarm bells ringing in the UN and other countries. The floods have so far claimed 1,003 lives and left over 20 million people homeless.

The unprecedented destruction in Sindh, Balochistan, Punjab and other areas of the country have shocked the world. At least three million people are in need of immediate aid, with monsoon season showing no mercy and obliterating everything in its way.

This number is expected to rise in the coming days, with floods wreaking havoc in around 101 cities of Pakistan.

Preliminary findings by the NDMA, PDMAs and district management committees note that nearly 340 children and 211 women are among the people who perished in the recent floods and downpours this year. It also left more than 1,700 people injured.

As per the official data collected from different districts, 260 deaths and 1,083 injuries were reported in Balochistan, 187 deaths and 320 injuries in Khyber Pakhtunkhwa, 184 deaths and 233 injuries in Punjab, and 320 deaths in Sindh, while 41 died in Azad Jammu and Kashmir and 11 persons perished in Gilgit-Baltistan.

The preliminary data showed that approximately 1.5 million heads of livestock (goats, sheep, cows, buffaloes, etc.) were killed in the natural disaster putting the food security of the country at risk. Furthermore, according to the disaster managers operating in different parts of the provinces, nearly 3 million acres (8,300 square km) of agricultural lands were submerged which is likely to cause 20% reduction in agricultural production this year. Rough estimates suggest agriculture damage in this year’s floods and rains will cross the Rs750 billion mark.

The National Disaster Management Authority (NDMA) officials worry the scope of disaster and volume of destruction may be larger than what is being perceived, perhaps may even break previous records of four floods that impacted Pakistan since 2004. “Approximately 0.3 million acres of rice fields, 0.6 million acres of cotton crops, 0.3 million acres of sugar cane crops, and 0.6 million of corn, maize, beans, pepper, red gram, pulses and animal fodder fields were spoiled in the floods.” The initial findings also revealed that over 0.5m tonnes of wheat stockpiles were also spoiled by floodwaters.

As many as one million houses were either partially or completely damaged in the relentless downpours and consequent inundation in over 34 districts of Pakistan. Flood have affected over 3,500 kilometers of roads and highways near the Chenab, Kabul, Jhelum and Indus Rivers as well as its tributaries and canals. Estimates reveal that over 280 small and large bridges including 21 railway bridges collapsed due to the natural calamity. Official figures further highlight that over a dozen small dams were also affected by heavy rains in Balochistan. Modest official data also pointed out that more than 320 shops and 139 major markets were also washed away by floods in Pakistan. Although the extent of damage is larger than the perception as more data pours in.