* Imran Khan urges people of Islamabad to come out today in support of Gill, ARY
* Rallies will be held in all divisional headquarters across country
* No effort will be spared to bring those responsible to justice
* If a political worker can be tortured like this, then it can happen to anyone
* Better to not stay alive if we have to become slaves of 'imported' government 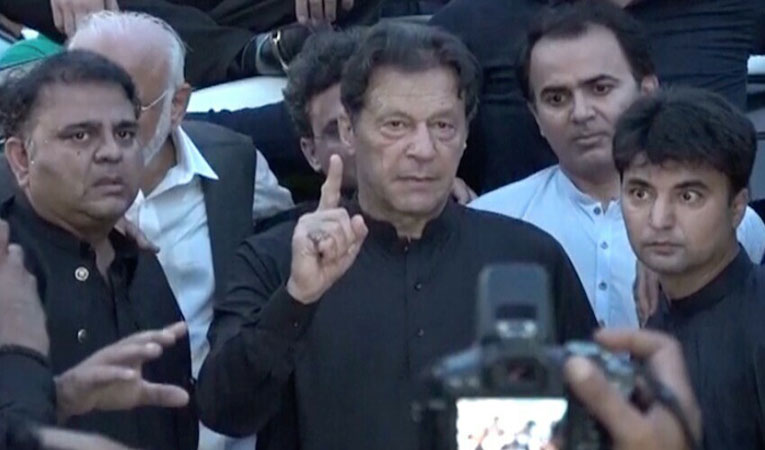 PTI Chairman Imran Khan Friday claimed that his chief of staff Dr Shahbaz Gill was “sexual abused” in police custody and announced nationwide rallies to show solidarity with him.

“I will lead a rally in Islamabad tomorrow […] and rallies will be held in all divisional headquarters across the country,” the PTI chairman told journalists. His brief presser came after he was barred from meeting Gill at the Pakistan Institute of Medical Sciences (PIMS). Despite the police’s demand to extend Gill’s remand in the sedition case, a district and sessions court in Islamabad earlier in the day ordered to send him to the PIMS for a reassessment of his health. “Shahbaz Gill’s condition is not fine,” the court remarked while announcing the verdict reserved by Judicial Magistrate Raja Farrukh Ali Khan.

PTI leaders have demanded the release of Gill from police custody and repeatedly claimed that he was tortured in police custody. Amnesty International has also raised concerns over reports regarding the PTI leader. Gill is currently under treatment at the PIMS hospital after his health reportedly deteriorated at the Adiala Jail. Subsequently, a medical board was formed to determine the condition of Gill. The board recommended several tests and X-rays for the PTI leader. The results showed that there were no abnormalities and his health was fine. Meanwhile, in his press conference, Imran reiterated that he would prefer death and will not accept the current government. In a series of tweets earlier, the PTI chairman demanded justice for his chief of staff and claimed that he was sexually abused while in police custody. “All the pictures and videos show clearly Gill was tortured both mentally and physically, including sexual abuse – most too gruesome to relate,” the PTI chairman said in a series of tweets.

He said the police humiliated Gill for breaking him down and that he now has full detailed information about the events regarding Gill’s episode. “ICT police say they did not inflict any torture. So my question is: Who tortured Gill?” Khan asked.

The PTI chairman added that there was a general perception in the public at large and in “our minds too as to who could have carried out the gruesome torture”.

“Remember the public will react. We will leave no stone unturned to find out those responsible and bring them to justice,” he added. He urged all the residents of the capital city to come out in the evening on Saturday (today) after Maghrib prayers and join the PTI rally. “Rallies will be taken out from every divisional headquarters.” Referring to Gill, the PTI chief went on to say that “if a political worker can be tortured like this” then this could happen to anyone. Imran again emphasized that “it was better to not stay alive if we have to become slaves of the ‘imported’ government.” In a press conference earlier, ex-special assistant to prime minister Babar Awan said that Khan will lead a rally for party leader Shahbaz Gill’s release tomorrow (Saturday).

Awan said that the party is “united” when it comes to Gill as he is an asset to the PTI. Awan slammed the government and police for “custodian torture”, saying that such events were not witnessed in the past.

“Shahbaz Gill is an asset to the PTI; he sacrificed everything for the party. The reason behind torturing him is to force him to speak something against Imran Khan,” Awan said. The PTI leader added that no one could be tortured and forced to speak something that they wish not to. “Several cases have been lodged against [politicians] in the past, but never have they been treated in such a manner.”