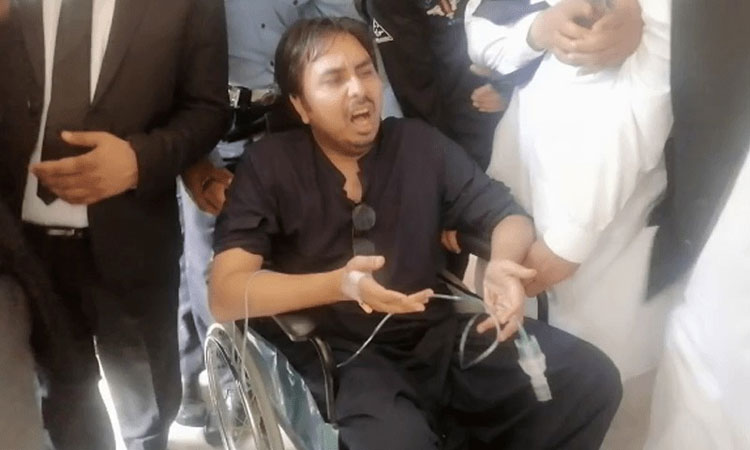 A judicial Magistrate Friday directed to conduct another medical analysis of PTI’s leader Shahbaz Gill and ordered to keep him in hospital till August 22, in a sedition case registered by Kohsar Police Station. The Islamabad court order said that the two-day physical remand of the accused had not started yet and thus rejected the request of prosecution for further eight days remand. Gill was produced before the court of Judicial Magistrate Raja Farakh Ali Khan by the police amid foolproof security arrangements. The court said that the accused seemed not well as he was suffering from asthma and instructed to conduct his medical examination again. During the course of proceeding, the police requested the court to grant further eight-day physical remand of the accused. At this, the judge asked whether the two days physical remand had completed as the accused had been in hospital.

He questioned why the prosecution was demanding further eight day remand. Special Prosecutor Rizwan Abbasi contended that a medical analysis of the accused was done when he was admitted in hospital.

He said that the investigation officer himself could ensure medical checkup of the accused in emergency without the directives of the court. It was not written anywhere in the law that the accused physical remand couldn’t be granted in sickness, he added. He said that the medical officer of Adiala Jail had informed the IHC that Shahbaz Gill was stable when he was brought at jail and his medical report was normal.

The officer said that health problems appeared of the accused when the court granted the police further two day remand of the accused, he said. Gill’s counsel Faisal Chaudhry Advocate said that the court had itself viewed the health condition of his client. It was a genuine issue, he said, adding that there were also signs of torture on Gill as per the medical report. The police were also admitting that the remand time had been completed, he said. The lawyer said that the police had interrogated his client even in hospital, adding that there was no doubt that 48 hours remand time had been expired. He opposed the request of police for further physical remand of the accused.

The court earlier reserved its judgment and later ordered to keep the accused in hospital till Monday. The court also said that the physical remand of the accused was yet to start. Meanwhile, the Islamabad High Court (IHC) Friday reserved its judgment on maintainability of a petition seeking to set up a special medical board to conduct medical analysis of Shahbaz Gill. Justice Miangul Hassan Aurangzeb heard the case filed by PTI’s Secretary General Asad Umar regarding the matter. At the outset of hearing, petitioner’s lawyer Dr. Baber Awan pleaded that in some doctors in current medical board had no expertise in some diseases.

The court remarked that whether a medical board was not established when a report of the accused came. It further noted that in an application Acting Chief Justice Aamer Farooq had also summoned IGP Islamabad but now the defence was demanding another medical board through a separate plea. Baber Awan said that they wanted an impartial medical board wherein doctors from all provinces should be included from private sector instead of government. The court asked whether it would be better if this matter was left on secretary interior. The lawyer prayed the court to take measures for insurance of basic human rights to Shahbaz Gill. When he was produced before the judicial magistrate there were signs of torture on him, he claimed. Justice Miangul Hassan said that there was no provision of torture against any accused in law even in sedition case. He would pass an order in this regard, he said. After listening arguments, the court reserved its verdict on the maintainability of the case.