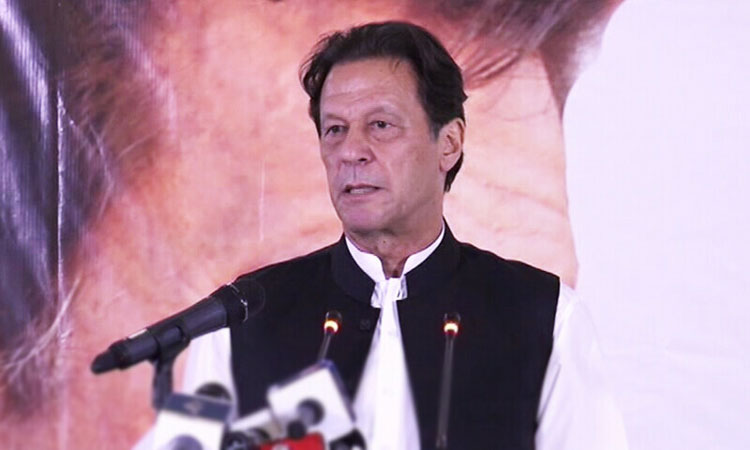 PTI Chairman and former premier Imran Khan Thursday told the “neutrals” to review their policies, as there was still time left to make changes and the decisions taken behind closed doors were not in the country’s interests.

Addressing a seminar on the freedom of expression, he said the establishment imposed these “thieves” upon Pakistan.

“How did the establishment let them [the current government] rule us knowing about the foreign conspiracy? This is because they have the most power right now,” said the former premier.

“No matter how much you [the establishment] call yourself neutral, the nation will blame you for imposing this government on us,” he added. Imran said the establishment was forcing them to accept these thieves and for that, they were spreading fear among the nation. “They are calling our MNAs and pressuring us to accept this government,” he revealed.

The PTI chairman claimed that the government “picks up” his party’s social media activists and forces them to say that they tweeted under his directions.

“Whoever tweets against the army is picked up,” he added.

Talking about Shahbaz Gill, Imran said he shouldn’t have passed the remarks for which he was being tried, adding that torturing him was a big crime.

“Maryam Nawaz, Ayaz Sadiq, Maulana Fazlur Rehman have talked against the army, however, nothing happened to them,” he stressed. He once again repeated that transparent elections were the only way to stabilise the political situation in the country.

Berating the two main parties in the coalition government, the former prime minister said that the PML-N and PPP have made corruption cases against each other.

“In 1996, Nawaz Sharif and Zardari moved Rs1.5 billion out of the country,” he alleged.

Khan claimed that everyone knows about the corruption done by these parties. “I supported former president Pervez Musharraf because he came to end corruption, however, he later gave an NRO to these people,” he added.

He said political stability was the pre-requisite for economic development and neither could be had without free and fair elections.

The PTI chairman warned that “correct decisions” needed to be taken immediately, asserting that he preferred death instead of accepting the incumbent government, which he referred to as a “compound failure”. He recalled that prior to him coming to power, the Inter-Services Intelligence (ISI) used to tell him about the corruption of the PPP and PML-N. “I started believing that establishment will act but that did not happen.” Imran said that when he became the prime minister, the National Accountability Bureau (NAB) was not under his control. “There was a hand of someone who would press the accelerator and undo it as per his wish. If NAB was in my control, I would have retrieved Rs15 to Rs20 billion from them [the political parties],” he claimed.

“I now ask the establishment, how did you let these corrupt leaders rule the country? This means you don’t see theft as a bad thing. “When the establishment was aware of the corrupt people, why did not they stop their way?” the ex-premier asked, pointing out that the establishment had the greatest degree of power in the country. “But with great power comes great responsibility,” he said. “No matter how many times you call yourself neutral, history will blame you for what you did with the country.”
Imran then cautioned that there was still time to “review policies”, elaborating that “decisions taken behind closed doors” were not in the best interest of Pakistan. “You should review and think that there are 220 million people in this country […],” he said, adding that over 60 per cent of the population comprised of youngsters, and they needed jobs. The PTI chairman also alleged that attempts were being made to disqualify him and break his party, saying that the country was in a phase where people were being psychologically pressured into accepting the new setup. “And they are using every tactic for it,” he pressed. “