* PTI leader says he's not ashamed of his statement
* Claims he did not attempt to provoke anyone, just targeted bureaucrats involved in 'wrongdoings'
* Another case registered against Shahbaz Gill in Karachi 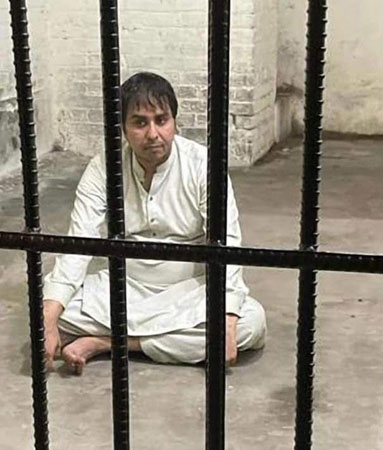 A lower court in the federal capital Wednesday granted the police a two-day physical remand of PTI Leader Shahbaz Gill in a case of sedition and inciting the public against the state institutions.

In a written order, the court said it was necessary to grant the physical remand of the accused due to the seriousness of the allegations. The court further said that it was also mandatory to conduct a forensic test of the recorded voice of the accused.

The judge also ordered the police to conduct a medical test of Shahbaz Gill and instructed the police to produce the accused again after completing investigation within two days.

Earlier, the Islamabad Police produced the accused before the court of Duty Magistrate Umar Bashir and requested the judge to grant a fourteen-day physical remand.

The police adopted the stance that it had to recover the relevant draft from the accused and investigate the matter pertaining to his controversial statement. “We also need to investigate at whose behest the programme was aired,” the police told the judge.

However, Gill’s advocate Faisal Chaudhry opposed the request of physical remand. He said that his client had not spoken during the TV program on the consent of anyone else.

The court, however, granted the police a two-day physical remand of Shahbaz Gill. Kohsar Police Station had registered an FIR against Shahbaz Gill for allegedly giving controversial remarks against the sensitive institutions of the country.

The case has been registered under Sections 124-A (sedition), 505 (statements conducing to public mischief), and of the Pakistan Penal Code. Gill has been accused of spreading chaos, inciting people against the state along with other serious allegations. The accused was arrested on Tuesday by the Islamabad Police.

The police took Gill into custody from Bani Gala Chowk.

Faisal Chauhdry, Gill’s counsel, told the judge that the programme was not aired on anyone’s directives. Gill had attempted to incite hatred within the Pakistan Army while speaking on a private TV channel two days back.

He had been using abusive language against the journalists and hurled threats at senior bureaucrats. The PTI leader had been involved in personal attacks and making below-the-belt remarks against his political opponents.

34 (acts done by several persons in furtherance of common intention)

120 (concealing design to commit an offence
punishable with imprisonment)

131 (abetting mutiny, or attempting to seduce a soldier, sailor or airman from his duty)

153 (wantonly giving provocation with intent to cause riot)

153-A (promoting enmity between different groups)

Talking to the media outside the court, Faisal Chaudhry said the PTI would approach the high court for dismissing the case against Gill.

The lawyer told journalists that he saw “spots of blood” on Gill’s clothes and that he was tortured in an “organised manner”.

Chaudhry said the PTI leader informed the court of the “danger” he faces in police custody.

“Shahbaz Gill fears that if he is sent into remand, then he might not be able to the court again. The government, without any evidence, got a case registered against him.” Gill, ahead of being presented before the court, told journalists that he was not “ashamed” of the statement that he made on the private television channel.

“There was nothing in my statement that I am ashamed of [….] my statement was of a person who loves his armed forces,” the ex-special assistant to the prime minister said.

The PTI leader said he did not attempt to provoke anyone and that he was only pointing towards bureaucrats who were involved in “wrongdoings”.

Speaking to a news channel, Interior Minister Rana Sanaullah said Gill’s comments were part of a planned conspiracy to create division within the military.

“The conspiracy was hatched during a meeting under Imran Khan’s supervision. If we find evidence against him [Khan], we will arrest him as well,” he warned.

Amid reports of Khan’s arrest, AML chief Sheikh Rasheed warned the coalition government that attempts to arrest him or break the party would trigger “bloody politics” in the country.

Meanwhile, in a press conference a day earlier, Sanaullah said that the comments were according to the script prepared under the supervision of Khan, which was carried forward by former information minister Fawad Chaudhry and Gill.

“Khan is working on a narrative after realising that he had been trapped in the foreign funding and Toshakhana reference,” the interior minister said, adding that this conspiracy was plotted to divert public attention from their [PTI] wrongdoings. “The sentences that were said are such that I think it is not in the national interest to repeat them,” he stated, claiming that the PTI leader went to the extent of “leading people towards rebellion” and “inciting mutiny and sedition within the institution”.

He said a malicious campaign was launched on the social media after PTI’s leadership was exposed in foreign funding and Toshakhana cases. PTI’s Fawad Chaudhry and Murad Saeed were the first to report the arrest on Twitter.

“Shahbaz Gill has been abducted from Bani Gala Chowk by people who came in vehicles without number plates,” Fawad said in a tweet. CCTV footage of his arrest show police commandos in uniform trying to arrest him as he locks himself in his vehicle.

One of the police commandos uses the butt of his gun to break the window glass to force open the door and take him out. The police finally took him away in a silver-colored sedan with tinted glasses. Former prime minister and Pakistan Tehreek-e-Insaf (PTI) Chairman Imran Khan termed Gill’s arrest “abduction”.

Imran Khan shared the video statement of Gill’s driver who claimed that the PTI leader was tortured and dragged out of the car. “This is an abduction not an arrest. Can such shameful acts take place in any democracy? Political workers treated as enemies. And all to make us accept a foreign-backed government of crooks.”

On the other hand, following Gill’s arrest, the former prime minister has also summoned an important meeting of the party in Islamabad. The meeting will discuss the matters pertaining to arrest of the PTI leader. In a statement on Twitter, PTI leader Murad Saeed stated that the incumbent government had lost its mind. He said Shahbaz was arrested and even the windows of his car were broken.

Lashing out over the action taken against the PTI leader, he said that how many they are going to arrest and ban. He also mentioned a terrible plan that was averted by the supporters of PTI Chairman last night. Also the PTI supporters made it clear that getting to Imran Khan will be crossing the red line, he said. He further added that those who attacked Shahbaz Gill’s car tortured the assistant and kidnapped the PTI leader. Meanwhile, another case was registered in Karachi against Shahbaz Gill by the Malir Memon Goth Police Station. Provision of sedition, inciting the public against the state institutions, spreading anarchy and hatred are included in the case.