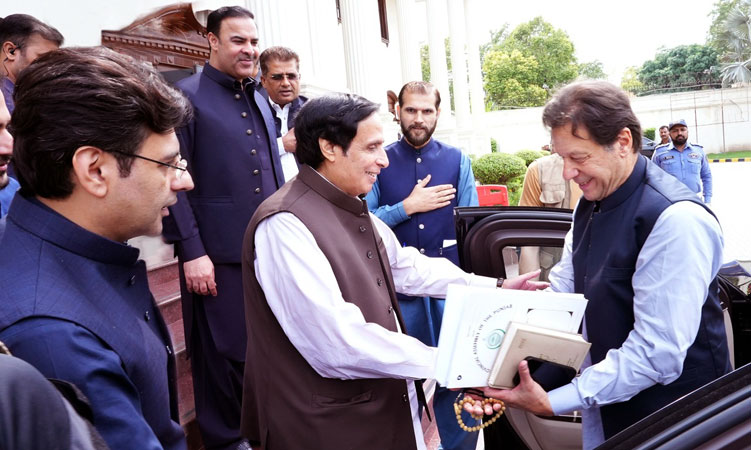 Former prime minister Imran Khan on Sunday directed his party leaders to begin preparations as the coalition government can go for general elections in the next six to eight weeks, a private TV channel reported. During a visit to Lahore, the PTI chairman held meetings Punjab Chief Minister Chaudhry Pervaiz Elahi, MPAs and party representatives. During the meetings, Imran maintained that the only way the country can be stable again is through free and fair elections.

“The expectations of the people are now tied to PTI,” he said, emphasizing that general elections can be held very soon considering the economic turmoil in the country.

The PTI chief went on to say that people enter politics to make money but “now the public’s consciousness has awakened.” “Even the kids and young generation are aware of what has been going on,” he added. Reports said the ex-PM also deliberated upon the names being finalized for the Punjab cabinet. Punjab Chief Minister Chaudhry Pervaiz Elahi and former federal minister Moonis Elahi Sunday met PTI Chairman and former premier Imran Khan here at the CM Office, Lahore. Matters of mutual interest, political situation, administrative affairs of Punjab and law and order situation, as well as the steps to provide relief to the people of Punjab came under discussion. Imran Khan congratulated Ch Pervaiz Elahi on forming government in Punjab. The Punjab chief minister apprised the PTI chairman that effective steps were being taken for maintaining law and order in the province during Muharram-ul-Haram and hoped that an environment of political homogeneity would prevail during the holy month of Muharram.

The CM informed Imran Khan about the steps being taken by the Punjab government to provide assistance to the flood victims. The administration and the departments concerned are providing timely assistance to the flood victims proactively, he added. The CM mentioned that the provincial government would provide financial aid amounting to Rs 800,000 each to the heirs of the deceased persons. The CM said that he himself was overseeing the ongoing relief activities in the affected areas.

Meanwhile, Imran met Sania Nishtar and former provincial minister Hashim Jawan Bakht in which Imran Khan directed them to expeditiously move forward Ehsaas Programme in Punjab. Imran assigned an important responsibility to Sania Nishtar to ensure implementation on the Ehsaas Programme. He denounced that the previous Punjab government halted this splendid programme which was meant to help the poor families. Imran lamented that the previous Punjab government overlooked this significant programme meant for the welfare of the poor and the impoverished segment of the society.