Ushna clears the air about rumours of her engagement

* She also tagged her rumoured fiance in her post 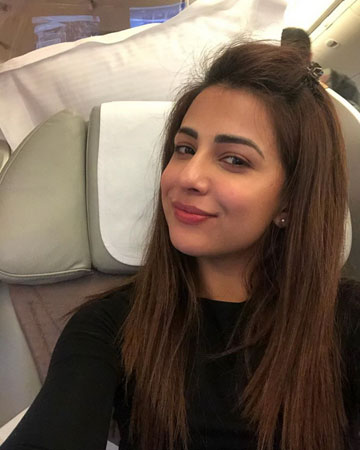 Ushna Shah recently stormed the Internet when she shared some totally unexpected and dreamy clicks with golfer Hamza Amin. Soon these pictures went viral leaving her fans in an awe-inspiring mood. People soon speculated that they both are in a relationship or even engaged. Ushna Shah’s caption is saying it all. Outstanding actress and beauteous muse was looking so gorgeous in these mesmerising clicks.

She also tagged her rumoured finance in her post. Now after creating a buzz on social media Ushna Shah has come up with another stance and that’s totally breaking her fans’ hearts. Just not that her recent statement is also igniting criticism. Taking to her Instagram handle Ushna tried to clear the air about the rumours of her engagement. Ushna wrote that her pictures have got misinterpreted by social media as she hadn’t announced her engagement. She went on to thank all of her fans who congratulated her. Ushna Shah’s post is making people furious as they are questioning her upbringing and ethics. Fans were of the view that if she’s not engaged then she must be dating that’s totally unacceptable according to keyboard warriors. Ushna has always been relatively unaffected by all the trolling and criticism.