Dollar market under control, economy back on track: Miftah 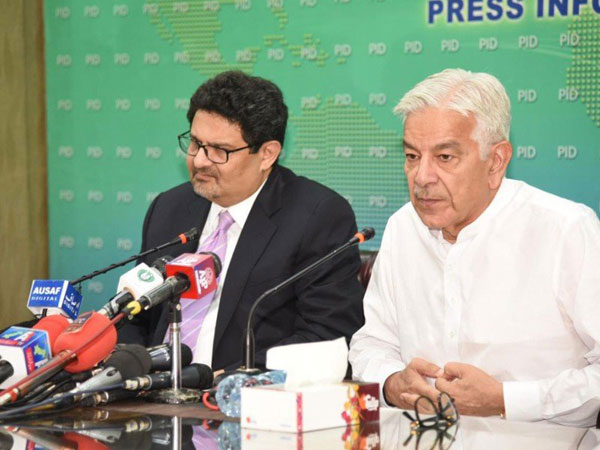 Finance Minister Miftah Ismail Thursday said the dollar market had stabilized and claimed that stability had returned following the government’s announcement that it will complete the remainder of its constitutional term.

Addressing a press conference in Islamabad Ismail said: “The dollar market has been quite shaken for two to three days since July 17 but it has now been brought under control slowly.”

The finance minister acknowledged that there was a ‘political turmoil’ and negative sentiment in the market amid fears of the federal government being shaken, but added that things were now “stable since the coalition government said that it was not going [anywhere]”.

He said one of the reasons for increased pressure on the rupee was the bill for last month’s imports. However, he said imports for this month and the next would be lower due to measures taken by the State Bank of Pakistan (SBP), which would further reduce pressure on the rupee. Ismail said there were ample fuel reserves for one to two months and fuel demand had seen a reduction as well, due to high prices, so pressure on the rupee would decrease.

“You will begin to see its effects by next week, but more importantly, from next month when the daily demand for dollars in banks will be less than supply.” Ismail said the economy was on the right track and all indicators, apart from the exchange rate, were positive.

He reiterated that the PML-N had already resolved to save the country from default even at the cost of its political capital, and had taken difficult decisions without any regret.

“I tell you that no cabinet colleague of mine has said to me: ‘Miftah you have bungled us up’, and instead everyone says ‘[you have] taken correct [decisions]’,” he said.

“We will take the same decisions no matter how many times the choice is to save Pakistan from default,” the finance minister said.

Responding to a question, Ismail said the SBP governor would be nominated by next week while the bank’s board members would be announced today.

Talking about the depreciating rupee, Miftah said Acting SBP Governor Murtaza Syed had no hand in the depreciation of the rupee. “The demand for dollars in banks will decrease. Last month, there were imports of $7.5 billion and this month’s imports are less than last year,” said Miftah.

He further stated that the government was focusing on minimizing imports and increasing exports.

Meanwhile, Asif said external factors had a bigger role to play in the dollar’s constant appreciation.

He, too, reaffirmed that the PML-N had decided to form the government at the potential loss of its popularity, to prevent a “sure default” and take the required difficult decisions.

Asif said exchange rate issues would eventually resolve themselves while the effects of default could be “far more terrible”. “Pakistan’s economic safety is foremost and all other things, including politics, are secondary.”

Asif addressed the Punjab by-elections and acknowledged that some rifts were caused in the party due to contesting former PTI MPAs, says a news report.

However, he said that as a whole, “it is our success and we have consolidated our position, not lost it.”

He said the by-polls were still a success for the PML-N as its votes and seats had increased. “The PTI has also gained, but these seats were already with the PTI. If there has been any value addition in it, then that translated into seats, there is no doubt about that.”

Asif said that in contrast to elections conducted under the PTI government, it was a matter of great respect for the PML-N that no one had raised rigging allegations about the by-elections.

“I want to emphasise that Hamza Shehbaz’s administration has carried out the most transparent elections of Pakistan’s recent history.”

He said the by-poll result was not a setback for the PML-N, nor was its stance defeated or impacted by inflation.

“We protected the sanctity of the vote and did not allow it to be trampled despite our government being at stake. We fully realise this but did not make any compromise, which would become a liability for us tomorrow.”

Asif said the government had established a new tradition by not interfering in the by-elections. He added that the establishment’s decision to not interfere should also be welcomed, instead of being criticised.

The PML-N stalwart noted that there were some districts where his party had no vote banks in the past but received a large number of votes from those areas on Sunday. He also noted that the party had given tickets to PTI defectors instead of its workers in some places which had made them heartbroken.

“Ever since we took an oath, we have tried to bring stability rather than doing politics. We will learn from the experience of July 17,” said Asif.