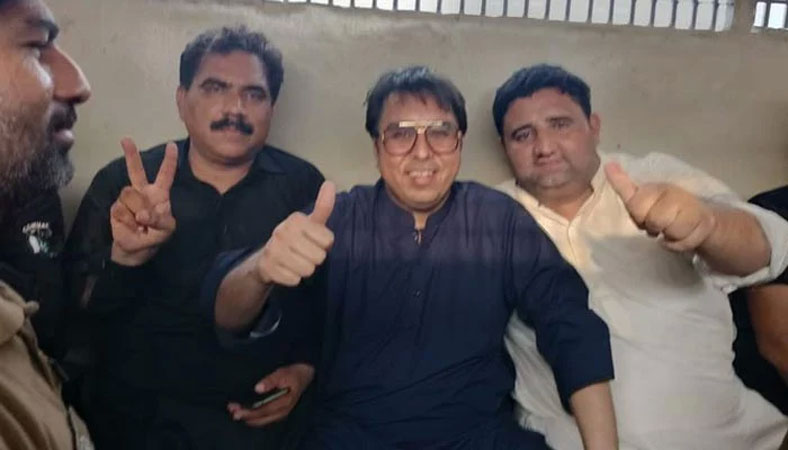 Gill was arrested for allegedly visiting different polling stations during the by-elections in the city with his security guards who were dressed as FC personnel. As per the election code of conduct for political parties and candidates, the Election Commission of Pakistan (ECP) has stated: “Carriage and display of all kinds of lethal weapons and fire arms shall not be allowed in public meetings and processions and official regulations in respect thereof shall be strictly observed. Aerial firing, use of crackers and other explosives at public meetings shall not be allowed.”

However, Gill denied the allegations of keeping any security guards dressed up in FC officials’ uniforms. He claimed that he had been engaged for three hours and was suddenly arrested without a warrant. “Strongly condemn illegal arrest of Shahbaz Gill simply to try [and] rig elections [and] spread fear in [people],” PTI Chairman Imran Khan wrote on Twitter, taking notice of the incident.

“These fascist tactics will not work [and] our [people] will not be deterred from exercising their right to vote. Handlers of imported govt should realize the damage they are doing to our nation,” he added. High-level inquiry ordered Commenting on the development, Interior Minister Rana Sanaullah said that private security companies recruit retired personnel, adding that directions have been issued to authorities concerned that all such private companies should be banned.

“I have ordered a high-level inquiry in this regard,” he said, addressing a press conference. PTI candidate Moazzam Jatoi accepted the presence of FC personnel, saying they were present in a factory. However, he said he would not comment on whether their presence was in line with the law. Meanwhile, Gill took to his Twitter handle and said he was not ‘afraid of getting arrested’.

“Before you reach anyone else, I am presenting myself for arrest,” he on Twitter, claiming he was “trapped in a factory”. “Imran Khan’s soldier is not afraid of such tactics. We did not come to do terrorism.” Former human rights minister Shireen Mazari tweeted that the ECP was “making a mockery of the electoral process in Punjab” and called the arrest “shameful abuse of power”.

Meanwhile, PTI leader Fawad Chaudhry urged other party leader to be prepared for arrests, saying that police brutality was underway across Punjab.