* Ex-PM says everyone makes mistakes but 'if you know that you have made a mistake, take a step back'
* Increasing gulf between army and nation will be a loss for Pakistan and armed forces 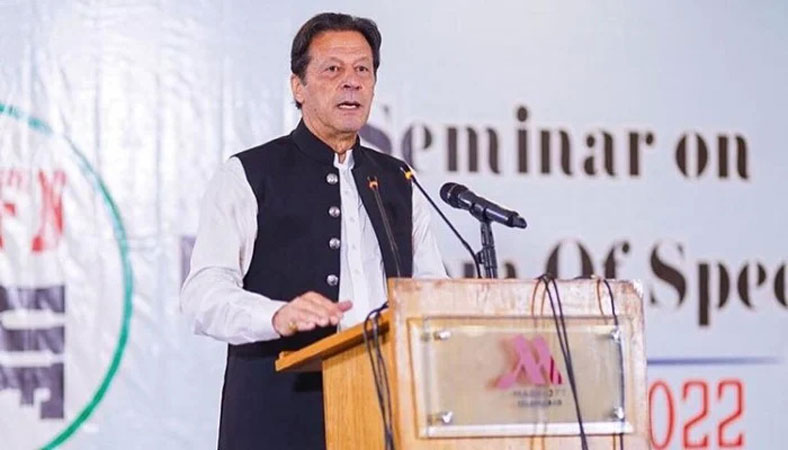 PTI Chairman Imran Khan on Saturday termed ‘U-turns’ imperative for political leaders and generals so that they can rectify their mistakes once identified.

“Mistakes happen, and one should take a step back to reconsider that they have made a mistake,” the former prime minister told a seminar in the federal capital. “Decisions are made in closed rooms mistakes are made by everyone but mistakes should be recognised and rectified.” However, he added that constructive criticism was essential as he opposed the practice of action against faultfinders on even against ‘little’ criticism.

He said that a strong army was Pakistan’s requirement and feared that the distance between the army and people is widening which he termed as ‘threatening’ if no remedy was taken for it. The establishment needs to reflect to not rush to action against the journalists and those criticizing the Pakistan Army as this practice was tarnishing the image of the military.

He contended that it was the era of social media and the flow of information could not be stopped. “Nobody can control social media,” Imran Khan argued.

He pointed fingers at the establishment saying that it was supporting the current setup in the country and the decisions were being taken behind closed doors. “First plan A is made and then behind these closed doors plan B is made. How could the decisions be correct if they will be taken in this manner.” The ex-premier said the longer the current setup runs, the more damaging it would be for the country.

The PTI leader reiterated that his struggle was to get rid of the Sharif and Zardari families from the political front “who have been taking turns to rule the country for the past 30 years.” “Pakistan has been ruled half the time by these two families and half the time by the dictators,” said Khan, claiming that all the dictators in the past weakened the country’s institutions and put fear above the law.

The former PM said freedom of expression was crucial for any nation, and no society can thrive without it. Khan asserted the media was never a threat to him, nor he took any action against it during his tenure. “I have never done anything wrong and never stole anything from the nation. I will not allow others to do it as well,” said the PTI chairman. Those families (Sharifs and Zardaris) controlled the media and judiciary to cover their corruption, he added.

Imran Khan distanced himself from restraints put on media freedom during his government, saying that any journalists picked up by the authorities were not on his directives. “[When I was the prime minister] it was discussed in the cabinet three to four times that some journalist was picked up. [I would like to say that] no journalist was picked up on my instructions. The problem was something else.”

The former prime minister said that the issue of abductions and missing persons came up after the war on terror, something which he said he had spoken against often. “Until I came into power, I didn’t know the army’s perspective [on the issue] and so I kept speaking against it,” Imran recalled, adding that there was a no greater pain than than seeing the relatives of missing persons coming to ask about their loved ones. “We came in the government and got to know that many times people were picked up under [the guise of] national security.”

Imran said he had taken up the issue with Chief of Army Staff Gen Qamar Javed Bajwa, which led to the release of many missing persons. “They (military leaders) said the problem was of the courts,” he said, adding that the explanation provided to him was that it was difficult to prosecute a terrorist in the courts due to a lack of evidence or witnesses. “Terrorism is such a thing that it became difficult to prove it in the courts and the army feared that if they (terrorists) are released they would again conduct [terrorist] activities.”

Nonetheless, he said, an agreement was reached and a bill was about to be passed for missing persons so that at least relatives could be kept in the loop.