* US president says Washington will not leave a vacuum to be filled by China, Russia or Iran 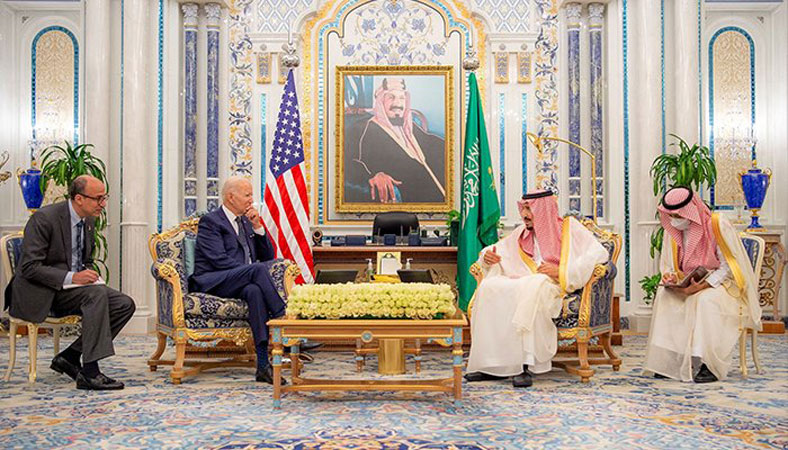 President Joe Biden assured Arab leaders the United States would remain fully engaged in the Middle East, as he wrapped up his first tour of the region since taking office.

“We will not walk away and leave a vacuum to be filled by China, Russia or Iran,” Biden said during a summit in Jeddah, on the Red Sea coast of Saudi Arabia. US ties to Gulf powers in particular have been roiled by multiple issues in recent years, notably Washington’s push for a deal to curb Iran’s suspect nuclear programme and its tepid response to attacks on Saudi oil facilities in 2019 claimed by Yemen’s Iran-backed Huthi rebels. The summit, the final stop of Biden’s Middle East tour, brought together the six members of the Gulf Cooperation Council as well as Egypt, Jordan and Iraq.

Biden had been looking to use the trip to discuss volatile oil prices and outline his vision for Washington’s role in the region. On Friday he met Saudi King Salman and Crown Prince Mohammed bin Salman, the kingdom’s de facto ruler who US intelligence agencies assess “approved” the 2018 operation that killed journalist Jamal Khashoggi. After a fist-bump with Prince Mohammed, Biden said he raised the Khashoggi case and warned against future attacks on dissidents.

Prince Mohammed, who chaired the opening of Saturday’s summit, has denied any role in the death of Khashoggi, who was dismembered in the kingdom’s Istanbul consulate and whose remains have never been found. Biden told the assembled Arab leaders that “the future will be won by countries that unleash the full potential of their populations… where citizens can question and criticise leaders without fear of reprisal”. Air Force One took off from Jeddah at around 5:00 pm (1400 GMT) on Saturday, bringing Biden’s four-day stay in the region to a close. Biden said the United States would commit $1 billion in food aid to the Middle East and North Africa amid rising food insecurity induced by the war in Ukraine.

Russia’s invasion of Ukraine has exposed a once unthinkable divergence between Washington and key Middle East allies Saudi Arabia and the United Arab Emirates, the oil giants that are increasingly independent on the international stage.

The wealthy Gulf nations, which host US forces and have dependably backed Washington for decades, have notably refrained from supporting the Biden administration as it tries to choke Moscow’s lifelines, from energy to diplomacy. Analysts say the new position reveals a turning point in Gulf relations with the US, long the region’s protector against neighbour Iran.