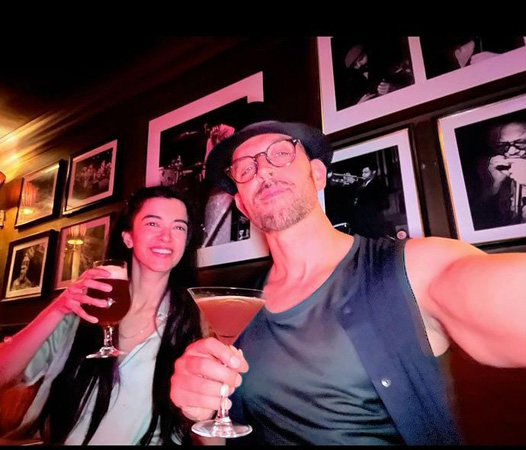 Hrithik Roshan and his girlfriend Saba azad have been shelling out one couple goal after another.

The two are currently in Europe and having a ball, if their social media updates are anything to go by.

The singer-actor took to her Instagram account today to share a few more moments in London as she and her beau Hrithik enjoy a good time listening to Jazz music at one of the most popular Jazz bars in the city. She captioned the post, “Where the jazz cats at?”

Meanwhile, as they said goodbye to their hotel, Saba shared a photo of the two of them on Wednesday. aba Azad posted a monochrome image to her Instagram Stories, writing, “Au Revoir Paris!!” Two pairs of feet are visible in the picture: Saba’s black boots and Hrithik’s athletic shoes. They are shown at the entrance of a building with a doormat that says “Home.”

Saba is a singer and an actor who has worked in films like Detective Byomkesh Bakshyi, Shaandaar and Karwaan. She is one half of the Madboy/Mink electro-funk duo.

Hrithik is eagerly awaiting the release of Vikram Vedha, which also features Saif Ali Khan and Radhika Apte. It is expected to open in theatres on September 30. Before leaving for Paris, Hrithik completed the Vikram Vedha shooting. In Siddharth Anand’s Fighter, he will also make his first appearance opposite Deepika Padukone. He will reportedly also appear in Krrish 4.