* In the video, King Khan can be seen hugging Bhaijaan who is holding a harmonium in his hand 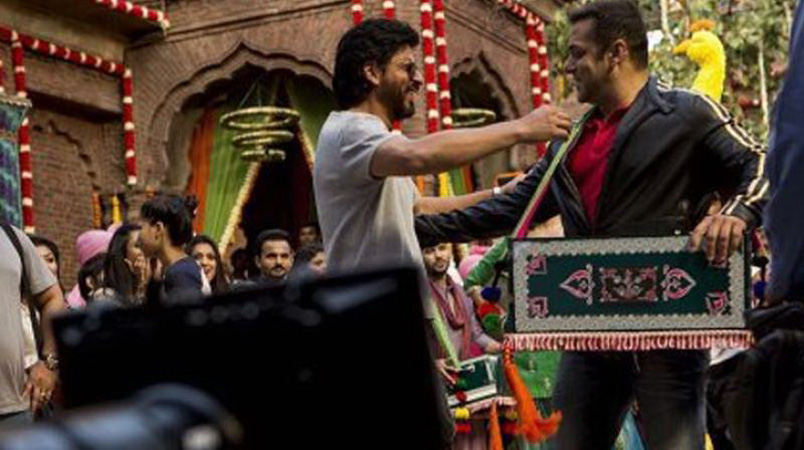 Shah Rukh Khan and Salman Khan share a beautiful bond and are the two top ‘Khans’ in Bollywood.

Both are going to appear in cameo roles in each other’s film, SRK will be seen in ‘Tiger 3’ and Salman will play a small role in ‘Pathaan.’ A video of the two pals, is going extremely VIRAL on social media from the sets of ‘Sultan’ ft. SRK, Salman and Anushka Sharma.

In the video, King Khan can be seen hugging Bhaijaan who is holding a harmonium in his hand. Anushka, who also starred in the film, can be seen standing behind them with an amused expression on her face.

The two Khans’ bond began when they were young stars and acted together in the 1995 film ‘Karan Arjun.’ Their friendship on and off-screen made fans refer to them as real-life Karan Arjun. They hit a rough patch during Katrina Kaif’s party after which they did not speak for five years. Later, they famously hugged it out at Baba Siddiqui’s Iftar party in 2014. Since then, they have only grown stronger.

On the work front, SRK will be making his much-awaited comeback to the silver screen next year with the film ‘Pathaan’ co-starring Deepika Padukone and John Abraham. Apart from that, he will be seen in ‘Jawan’ with Nayanthara and he also has Rajkumar Hirani’s ‘Dunki’ which also stars Taapsee Pannu.

Salman, on the other hand, has his much-awaited film ‘Tiger 3’ in the pipeline with Katrina Kaif. He also has ‘Godfather’ and ‘Kabhi Eid Kabhi Diwali’ in his kitty.