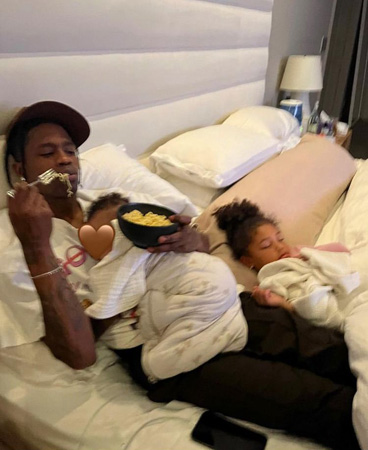 Spotted: Baby Boy Webster on Father’s Day. On June 19, Kylie Jenner shared on Instagram another rare photo of her and Travis Scott’s son as part of a holiday tribute to the rapper. The pic shows the 4-month-old cuddled up on dad as the musician lounges in bed and eats a bowl of Ramen noodles. Napping next to them is the pair’s daughter Stormi Webster, 4.

In the photo, Kylie covered her son’s face with a brown heart emoji. She and Travis have yet to show it publicly, and have also not revealed the infant’s new name since they changed it from Wolf earlier this year.

Since giving birth to the baby boy in February, Kylie has shared a few glimpses of the child.