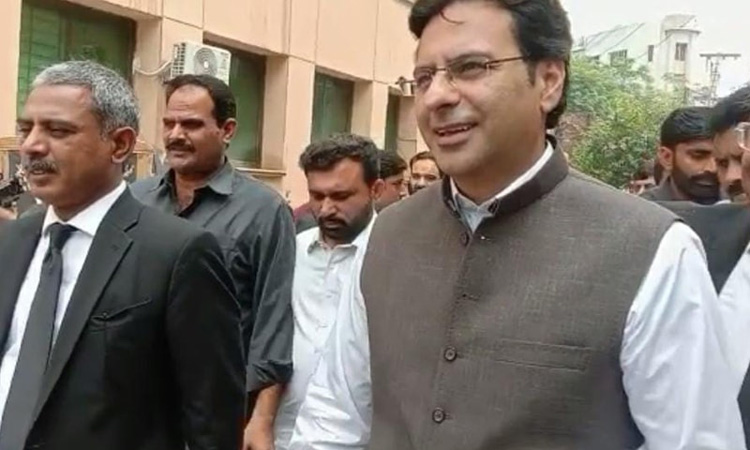 A special court on Wednesday granted pre-arrest interim bail to former federal minister Moonis Elahi till July 4 in a case, registered by Federal Investigation Agency (FIA) on the charges of money laundering in a sugar scam.

Advocates Amjad Pervaiz and Amir Saeed Rawn appeared on behalf of Moonis Elahi and argued that the FIA had registered a bogus case against their client and others on the charges of money laundering. They submitted that their client was innocent and had been implicated in the case due to mala fide intentions. They submitted that Moonis Elahi had joined the investigations, but it was feared that the FIA might arrest him. The counsel pleaded with the court to grant the benefit of bail to Moonis Elahi.

The court granted pre-arrest interim bail to Moonis Elahi till July 4 and stopped the FIA from his arrest till the next date of hearing, besides seeking a report.

According to the FIA’s first information report, the case against Elahi was registered on June 15 under Sections 34 (acts done by several persons in furtherance of a common intention), 109 (punishment for abetment), 420 (cheating and dishonestly inducing delivery of property), 468 (forgery for purpose of cheating) and 471 (using a genuine forged document) of the Pakistan Penal Code, read with Section 5(2) of the Prevention of Corruption Act, 1947 and Section 4 of the Anti-Money Laundering Act, 2010.

The FIR said the agency’s Anti-Corruption Circle in Lahore had registered an inquiry on August 7, 2020 pursuant to a report of the Sugar Inquiry Commission 2020. It said that in light of the report, the FIA was mandated by the federal government to probe financial and corporate frauds committed by various sugar mills, including Rahim Yar Khan (RYK)/Alliance Sugar Mills.

“During the ongoing probe against RYK/ Alliance Sugar Mills Group, it transpired that the following low-profile individuals – one of them had been at a very low level at the time – had jointly set up RYK Sugar Mills Ltd. in 2007/2008 at Rahim Yar Khan,” the FIR stated. The FIR added that the mill was “set up ostensibly by laundering funds from unexplained sources, including proceeds of financial crimes”.

It added that the mill’s capital increased by Rs720 million in 2008 but the source for these funds, as well as those required for the acquisition of land, import of plants and machinery and administrative expenses, remained “unexplained”.

Furthermore, the FIA said the co-accused, Mazhar Abbas and Nawaz Bhatti (Naib Qasid), had been signatories of “multiple bank accounts with a turnover of approximately Rs24 billion”.

“After passing through certain intermediaries (fictitious), 34.83% shares of RYK/Alliance were acquired by two special purpose vehicles (SPVs) while 9.56% shares were acquired by a nephew of Muhammad Khan Bhatti (presently an employee of the Punjab Assembly,” the FIR said, alleging both of the SPVs were controlled by Moonis Elahi – one directly and other indirectly through his family member.

“This makes it evidently clear that accused M Nawaz Bhatti and Mazhar Abbas lent their identities and acted on behalf of Ch Moonis Elahi to disguise the origin and nature of ill-gotten proceeds used to set up RYK Mills Ltd,” it went on to allege.

The FIA stated that Elahi and other accused were found involved in offences punishable under Section 5(2) of Prevention of Corruption Act 1947….and 3/4 Anti-Money Laundering Act 2010″; therefore, the agency had decided to register the case.

It said the role of other directors of the sugar mill, including then chief minister Pervaiz Elahi who had approved the NOC to set up the mill in 2007, would be determined during the course of the investigation.