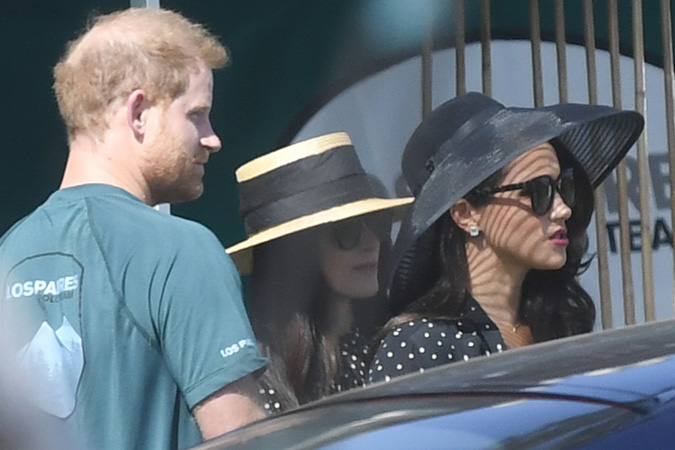 Red-lip classic. Meghan Markle and Prince Harry don’t often share a smooch while in public, but their recent outing made for a totally sweet PDA moment.

For Meghan and Prince Harry’s latest date, the royal parents didn’t stray too far away from the Montecito home they share with their two children, Archie, 3, and 11-month old Lilibet. On May 22, Meghan cheered on her husband from the sidelines while he played in a Santa Barbara polo tournament with his team, Los Padres.

In photos shared by the Daily Mail, Meghan was seen wearing a chic black polka-dot blouse paired with white knee-length shorts. She topped off her outfit with a black wide-brimmed hat and oversized sunglasses. She opted for loose curls and a timeless red lip that pulled together her look effortlessly. Meghan also wore one of her go-to necklaces, an initial pendant that features the letter “A” for the couple’s son, Archie.

Prince Harry’s team ultimately walked away with the Lisle Nixon Memorial trophy after winning the event. Meghan presented the trophy and gave each team member a kiss on the cheek.

When it was Prince Harry’s turn, she planted a sweet kiss on his lips, leaving some of her red lipstick rubbed off on her husband. Noticing the lip stain, Meghan quickly gave Prince Harry’s kisser a gentle wipe as the two laughed it off.

“Thrilled to be riding alongside my friend, Prince Harry, and the rest of the Los Padres team at the @santabarbarapoloclub ‘s Harry East Memorial Tournament,” Figueras wrote on Instagram April 30. “We’ve ridden together many times over the years and now that we’re both parents, it’s extra special to be able to spend this time together.”

He continued, “The name Los Padres was inspired by the proximity of the field to the Los Padres National Forest and also by our connection as fathers.”