* Recently, Soha had stepped out for a picnic with Inaaya and the mother and daughter duo was seen enjoying their summers in a park 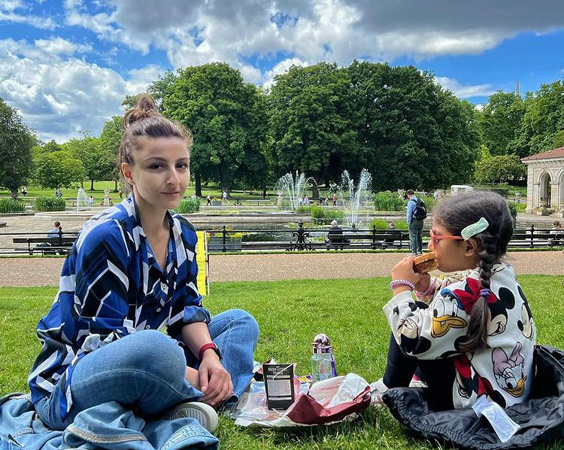 Soha Ali Khan and Kunal Kemmu have been one of the most loved couples in Bollywood who never miss a chance to paint the town red with their mushy romance.

The couple has been married for seven years now and is proud parents of Inaaya Naumi Kemmu. And as Soha and Kunal both are quite active on social media, they are often seen sharing beautiful pictures of their family moments on their respective Instagram accounts. Interestingly, the couple is currently holidaying in London with their princess and they are having a gala time together.

Recently, Soha had stepped out for a picnic with Inaaya and the mother and daughter duo was seen enjoying their summers in a park. Taking to her Instagram handle, Soha shared adorable pics from her picnic on a cloudy in London. In the pictures, the Tum Mile actress was seen dressed in a blue coloured shirt with denims and was sitting in a park. On the other hand, Inaaya looked cute in her white sweatshirt with cartoon characters printed on it and was busy enjoying her sandwich. Soha had captioned the image as, “Picnic in the park #london #summer”.

To note, Kunal and Soha believe in dividing parenting duties and often set examples for fans. Talking about the same, Kunal had told News18 that true partnership works by dividing the responsibilities.

However, he was all praises for Soha and said, “I have to confess that I think she does most of the heavy lifting and I’m there for the good stuff. But there are times when if Soha has to work and she is away then I have to do all of that and I enjoy doing it, but I think Soha also enjoys it, more than I do”. Kunal also admitted spoiling his little girl with ice cream.