US official says he hopes to boost Washington-Islamabad economic partnership 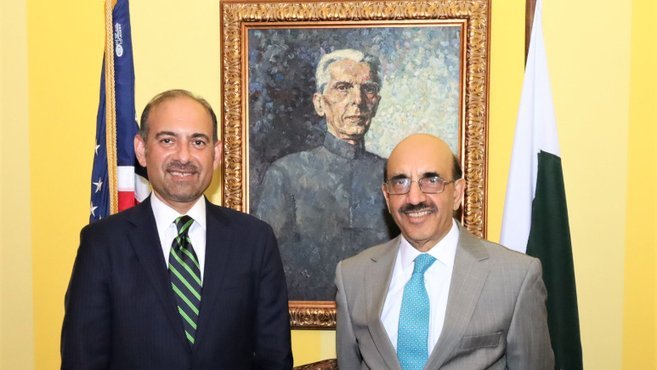 Special Representative Dilawar Syed said a Pakistani-American, brings to his office a strong background in business and entrepreneurship, having built global enterprises in the fields of technology, healthcare and business services.

Welcoming Special Representative Dilawar Syed at his residence, Ambassador Masood Khan congratulated him on his appointment to the high office in which he would help transform the global economic agenda around new technologies and the tech sector.

“We applaud your leadership,” the Pakistani envoy said.

On his part, Special Representative Dilawar Syed said that there was a huge potential to partnership and that Pakistan and the United States’ entrance into Silicon Valley would play a key role in growing bilateral commercial ties.

Ambassador Masood Khan, expressed gratitude to the US government for building confidence in investment opportunities in Pakistan.

Dilawar Syed immigrated to the United States from Pakistan as a college student to attend the College of Wooster in Ohio. He earned his Bachelor of Arts in economics and computer science from the University of Texas at Austin and a Master of Business Administration from the Wharton School of the University of Pennsylvania