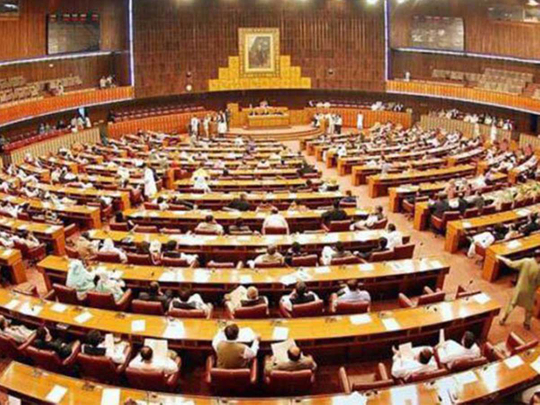 ISLAMABAD: The Senate of Pakistan on Monday unanimously passed a resolution on longstanding Israeli illegal occupation of Palestinian territories and atrocities over the innocent Palestinian people.

The resolution which was moved by Senator Mushtaq Ahmed said that the house is cognizant of longstanding Israeli illegal occupation of Palestinian territories and atrocities over the innocent Palestinian people during the last seventy-four years in sheer violation of United Nation Security Council Resolutions and international law and norms.

The Senate of Pakistan in strong terms condemned the recent atrocities and violence of Israeli forces over the innocent pilgrims and worshipers in Al-Aqsa Mosque and decades old blockade of Ghaza by the Israeli forces.

The house called upon the government to utilize all diplomatic and publicity resources for highlighting the Palestinian dispute on all international and regional fora in coordination with all Muslim States and prepare a roadmap for liberation of Palestinian territories.

The house called upon the government to explore opportunity for appointing a joint representative of all Muslim States for highlighting the Palestinian dispute at international level.

The house also passed another resolution of Senator Mushtaq Ahmed unanimously that the Senate of Pakistan is cognizant of the wide spreading Islamophobia around the world and expressed deep dismay and shock caused by the contemptuous act of burning, tearing and desecrating the Holy Quran by Rasumus Paludan on 14th April, 2022 in Sweden in sheer violation of international law and relevant UN Resolutions.

The house called upon the government to summon the Ambassador of Sweden and convey in strong terms the sentiments of the people of Pakistan over the provocative act and further demand stern legal action against the perpetrators.

The house further called upon the government to use political and diplomatic channels for discouraging occurrence of such provocative crimes against Muslim sentiments in the garb of freedom of expression in all UN member countries.”