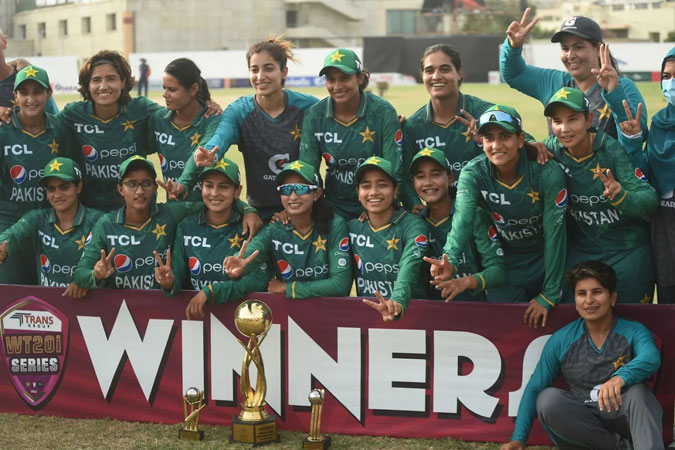 KARACHI: A measured captain’s knock from Bismah Maroof (15 not out) ensured Pakistan held their nerve to win on the final ball and complete a clean sweep against Sri Lanka in the three-match Twenty20 International here on Saturday. Pakistan won the first match by six wickets, second by seven wickets and the third and final by four wickets. The last contest was a low-scoring thriller and while Sri Lanka came close to cause a disruption, the hosts held firm, relying on the experience of some of their veteran players. Earlier, Sri Lanka had decided to bat first after winning the toss and made two changes to their line-up, replacing Inoka Ranaweera and Achini Kulasuriya with Udeshika Prabodhani and Sachini Nisansala. Meanwhile, Pakistan too made a few changes of their own, bringing in Diana Baig, Omaima Sohail, and Kainat Imtiaz in place of Gull Feroza, Aiman Anwer, and Fatima Sana.

Unlike the previous two T20Is, Sri Lanka got off to a promising start, with openers Chamari Athapaththu and Hasini Perera putting on a 69-run opening stand. Anam Amin and Diana Baig started with the new ball and kept the batters in check, but not for long, as Athapaththu got going with a six off Anam in the third over and in the next over Perara also collected her first boundary over mid-on. The batters continued to rotate the strike and occasionally hit boundaries to end the Powerplay at 31/0. In the ninth over, Athapaththu and Perera completed their 50-run opening partnership, ensuring a strong finish for Sri Lanka. However, the first wicket was not far, and a slight miscommunication between the batters saw Perra getting run out on 24, ending their solid opening stand of 69.

One brought two for Pakistan as Athapaththu lost her wicket on the very next ball. Athapaththu in an attempt to sweep Nida Dar, top-edged the ball, which went straight into the hands of the long-on fielder ending her innings on 37. Sri Lanka then lost another wicket owing to another mix-up. Niklashi de Silva’s poor call from the striker’s end resulted in a run-out, forcing Oshadi Ranasinghe to walk back to the pavilion on a duck. Sri Lanka now three down for 70, needed to rebuild the innings, but Harshitha Madavi also got run out on 1, leaving the visitors struggling at 75/4. Tuba Hassan added to Sri Lanka’s woes by removing Nilakshi de Silva on 9 after trapping her in front of the wickets.

They continued to slip further with two more wickets in the next over; first, Kainat Imtiaz sent Kavisha Dilhari back to the pavilion on 2, and then Ama Kanchana was run out on 2, leaving Sri Lanka stuttering at 93-7. Anushka Sanjeewani and Sugandika Kumari were however able to steady the ship towards the end of the innings. Sri Lanka reached three-figure mark with a couple of boundaries and finished their innings on 107-8.

Pakistan opener Iram Javed got the chase underway with a couple of boundaries in the opening over and looked aggressive right away. But her aggressive approach didn’t last long as Sugandika rattled her stumps when Iram (10) tried to smash the ball over fine-leg. After one down for 16, Omaima Sohail and Muneeba Ali didn’t take any chances and slowly started building the innings. But Omaima soon lost her patience and attempted to break the shackles by stepping out to attack Ranasinghe, only to miss and get stumped on 4. Muneeba, who had anchored the innings also lost her wicket after making a handy contribution of 25 runs. Skipper Bismah Mahroof sent other batters ahead of her, and Aliya Riaz and Ayesha Naseem were now in charge of getting Pakistan across the finish line.

Ayesha, who struck a match-winning knock in the second T20I, was aggressive in her approach; she collected a six off the first ball of Ranasinghe’s third over and then attempted to slog another one, but this time it was caught at the boundary bringing her innings to a close on 10. Aliya, who had her eyes set in the middle, attempted to collect a boundary off Ranasinghe but ended up giving a catch to the long-on fielder on 17.

Pakistan were still 34 runs away when Maroof walked out in the middle. She started building up a partnership with Nida, but Sri Lankan spinners continued to pick wickets, and Dilhari sent Nida back to pavilion on 14. Maroof (15 not out) was however determined to get the hosts over the line, and she batted with Kainat Imtiaz all the way to the end to help Pakistan win on the final ball of the match. With their four-wicket victory in the final T20I, they clinched the series 3-0. The three-match ODI series between the two teams, which is also a part of the ICC Women’s Championship 2022-25, begins on 1 June.