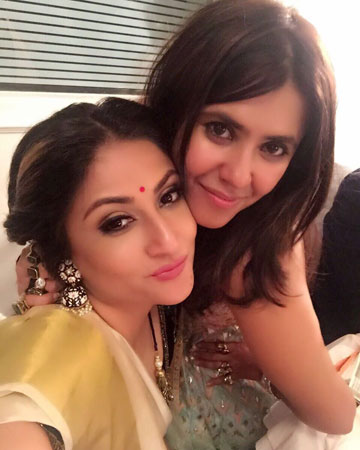 Urvashi is known for playing the vamp Komolika in Kasautii Zindagi Kay. In a new interview, Urvashi has revealed that the show’s producer Ekta Kapoor told her that she’ll be a ‘sex bomb’ before she signed it.

Urvashi made her acting debut in the Doordarshan series Shrikant, in which she essayed the role of Rajlaxmi. She also featured in Dekh Bhai Dekh, as Shilpa. She became a household name by playing the role of Komolika.

The actor has also starred in Waqt Ki Raftar, Ghar Ek Mandir, Kabhii Sautan Kabhii Sahelii and Kahiin to Hoga. In 2012, she participated in Colors TV’s Bigg Boss 6 and emerged as the winner. She was also seen in the series Chandrakanta, as Queen Iravati.

In an interview with Pinkvilla, while talking about her iconic character Komolika, she said, “Kasautii just happened. Even though I remember very clearly Ekta telling me that you’re going to be the next sex bomb on TV and we were like, dimaag mein utna nahin tha. Let’s be honest, at that point there was nothing much in the head except that I have to work, I need to work, I have to fend, I have responsibilities, all I want is to do good work.”

Kasautii Zindagi Kay aired from October 29, 2001 to February 28, 2008. Apart from Urvashi, the show also starred Shweta Tiwari, Cezzane Khan and Ronit Roy. A reboot of the show, also titled Kasautii Zindagii Kay, was aired on Star Plus from 2018 to 2020.