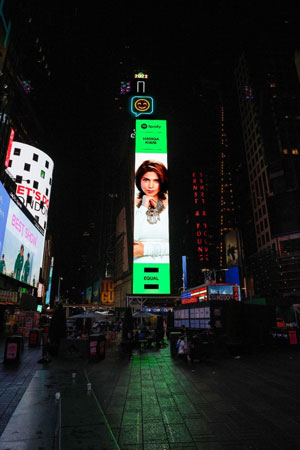 Hadiqa has been featured as Spotify’s artist of the month for their “EQUAL Pakistan” initiative following Arooj and folk singer Mehak Ali. According to a press release, Spotify’s new initiative aims to amplify voices of Pakistani female artists by giving them a platform that highlights and celebrates their music. Arooj was chosen as the streaming platform’s artist of the month for March, Mehak for April and now Hadiqa, for May.

Being one of Pakistan’s most loved voices for more than two decades now, Hadiqa appeared on a digital billboard at the heart of New York on May 20, a moment that has been captured and shared on her Instagram too. Hadiqa, on being given a spotlight for the world to witness, marked the special occasion with a song titled Yaad, part of her album VASL. Yaad has been added to the EQUAL Global playlist for millions of listeners to enjoy.