Disha impresses fans with her flying kicks in new video 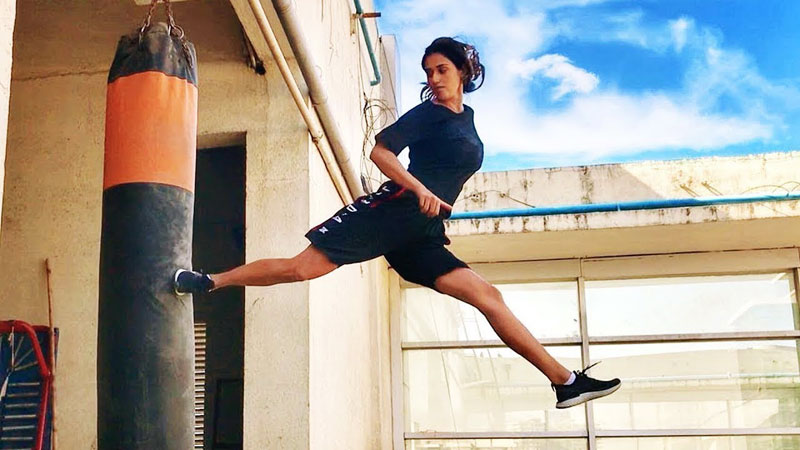 Disha Patani left her fans amazed after she shared a video of her showing off some impressive kicks during her gym day.

Disha took to Instagram on Sunday to share a carefully choreographed video, which saw her hit back at a man who teased her. The video started with Disha fixing her ponytail, as she arrived at the gym. However, she was stopped on her way by a man who asked her where she is going. Disha, who often shares videos of her intense workout sessions at the gym on her Instagram, then fights the villain off like a Bollywood ‘action hero.’

The video ended on a hilarious note as the man is defeated by Disha and asks her to walk over his corpse. Disha proceeds to do the same, after which he sits up and exclaims, ‘Sach mein chali gayi.” Disha captioned the video, “Just a regular day at the gym.”

Reacting to the video, Krishna Shroff wrote, “Too f****ing good!” adding clapping and fire emojis. Actor Darshan Kumar left clapping emojis on Disha’s post. A fan quipped that Tiger, who is known for his action films, must have taught the moves to Disha. Another commented, “Side effects of friendship with.” One wrote, “Female version of Tiger Shroff.”

Disha was last seen opposite Salman Khan in the 2021 film Radhe. She will be seen next in the action-drama Yodha, also starring Sidharth Malhotra and Raashii Khanna, scheduled for a release in theatres on November 11, 2022.

She will also be seen in Ek Villain Returns alongside John Abraham, Arjun Kapoor, and Tara Sutaria.