Over 40,000 Sikhs vote in Khalistan Referendum 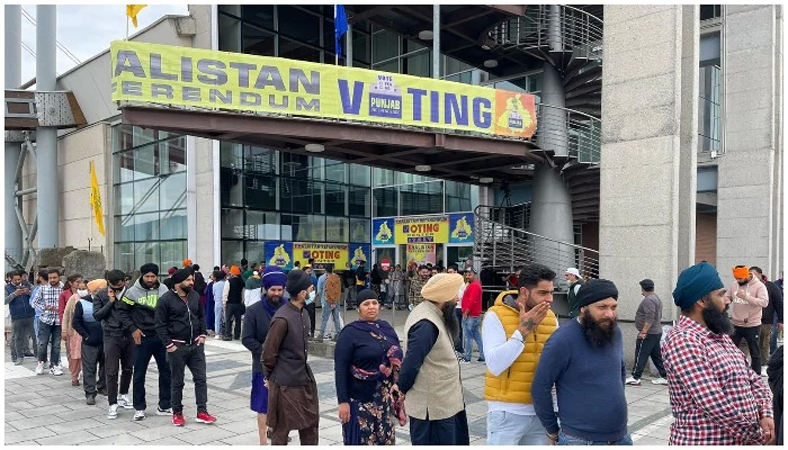 A record-breaking number of Sikhs turned up for the Khalistan Referendum voting campaign for the creation of an independent Khalistan state and secession of Punjab from India. According to various estimates – including the local intelligence assessment – more than 40,000 Sikh men and women answered calls by the pro-Khalistan advocacy group Sikhs for Justice (SFJ) to cast their votes for the non-binding voting process, which has captured the imaginations of the group since its start in the October of last year from London. A large queue started forming at 8am to cast vote at 9am but a floodgate opened at around 11am as the queue stretched to nearly half a kilometre, right from inside the voting complex to zigzag queues stretching past the vast car parking area. Most of those who attended the Brixia Forum Centre were Sikh youth and a significant number included women and families. Sikhs For Justice had announced ahead of the referendum that it had chosen the city of Brixia because Italy had over 200,000 Sikhs living in the county with a majority in Brescia. Most of the Sikhs are relatively young economic migrants who have come from India and have first-hand experience of living under Indian rule.

It looked like a festival of yellow colour as most of the attendees carried yellow flags of Khalistan and banners of Khalistan Referendum. They danced to the beat of drums and Punjabi music as well as pro-Khalistan slogans while waiting in the queues to get in. Inside the hall, over a dozen independent observers, including two UK professors with expertise in referendums, oversaw the voting process. By midday, it was jam-packed both inside and outside the hall as convoys of Sikhs arrived to cast their votes. Gurpatwant Singh Pannun, the SFJ’s General Counsel said the massive turnout in Italy is a clear message to the Modi regime that secession of Punjab from India is inevitable and the Indian government’s attempts to break the will of the Sikh people will fail. “As per Punjab Referendum Commission’s set procedures, the voting ended at 5pm while thousands of Sikhs were held back by Italian Police. The local police played a commendable role in overseeing and controlling massive voters ready to vote in Khalistan Referendum,” said Pannun.

The general counsel said that on June 5, Italian Sikhs once again will be able to participate in Khalistan Referendum voting that will coincide with the 38th Operation Blue star anniversary when the Indian army invaded Darbar Sahib and massacred thousands of innocent Sikhs.