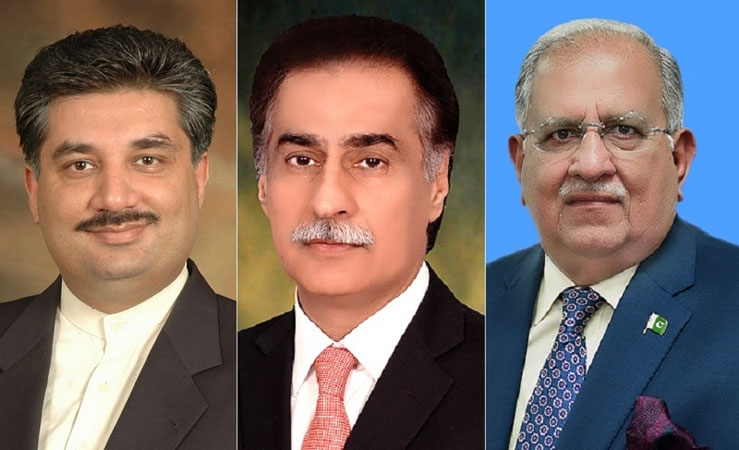 The federal government Tuesday notified portfolios of five new ministers – four federal and one state – a week after the 37-member cabinet of Prime Minister Shehbaz Sharif took their oath. According to a notification issued by the Cabinet Division, Khurram Dastagir Khan has been given the portfolio of power, Sardar Ayaz Sadiq has been made Minister for Economic Affairs, Mian Riaz Hussain Pirzada Human Rights Minister, while Murtaza Javed Abbasi has bagged the Ministry of Parliamentary Affairs. In addition, Muhammad Hashim Notezai has been made Minister of State for Power.

The first oath-taking ceremony of PM’s Shehbaz’s cabinet was held on April 19 at the President’s House without President Dr Alvi, who was reportedly unwell at the time. He was, however, present when a second oath-taking ceremony was held for four new members of the cabinet, says a news report. The second swearing-in ceremony took place just days after the president and the prime minister held their first meeting since Shehbaz became premier. The President’s Secretariat had said the leaders discussed issues related to the evolving political and economic situation in the country. Shehbaz’s cabinet continues to expand amid reports of differences among allies in the new coalition government and even within the PML-N over the selection of members and distribution of portfolios among them.

A news report quoting sources said there was a divide within the party over the selection of cabinet members and distribution of portfolios among them. It said PML-N Vice President Maryam Nawaz was “unhappy” with the PM for not considering names of veteran party leaders, who had a close and long association with the party’s supreme leader Nawaz. Meanwhile, Abdul Rehman Khan Kanju Tuesday took charge as Minister of State for Interior Division, reports APP. Officials of the Interior Ministry welcomed him upon his arrival at the ministry, said a press release. Secretary Interior Yousuf Naseem Khokhar briefed the minister about the affairs of the ministry and various public welfare projects, it further said. The minister said he joined the politics to serve the masses. Facilities would be provided to the masses at NADRA, Passport, FIA and other ministry’s departments, he said. He said they would make effort to address public problems on their doorstep.