Harry Styles, Billie Eilish and others take the stages for electrifying performances

* 'This lady taught me to sing,' Harry said onstage, per Variety 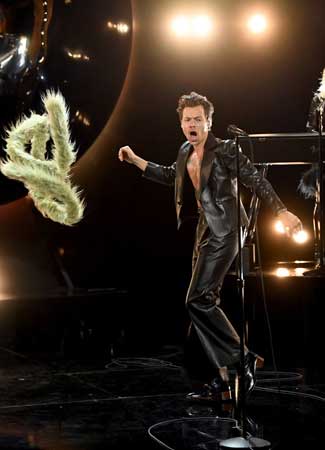 Let’s go girls and boys! Harry Styles’ Coachella performance was nothing short of perfect. The singer, 28, took the stage on April 15 to perform a headlining set consisting of some of his biggest hits-including “Watermelon Sugar” and “Sign of the Times,” and also brought on a surprise guest-Shania Twain. The two singers, twinning in sparking outfits, performed the country star’s ’90s hit singles “Man! I Feel Like a Woman” and “You’re Still the One.”

“This lady taught me to sing,” Harry said onstage, per Variety. “She also told me that men are trash.”

Shania responded, “I’m a bit starstruck, what can I say? No, really, I’m a fan of you, of course. I realize that when I was writing this song, you were just a little kid. It’s kind of a dream and very surreal to be sitting here right now to sing this song with you. I think I’m just in love and this song is all about love. So let’s just sing about love.”

In 2020, the country star said on the U.K. TV show This Morning that she and Harry texted each other about music and the idea of a collaboration.

Harry’s performance comes just months after he was announced to be a Coachella headliner alongside Billie Eilish and Kanye West, who later dropped out of the music festival and was replaced by The Weeknd and Swedish House Mafia.

Also during his Coachella set, Harry performed his newest single “As It Was” from the upcoming album Harry’s House, due out May 20. After its release, the No. 1 single caused a stir on social media by fans who speculated that a voice heard at the beginning of the track belonged to one of the children of Harry’s girlfriend, Olivia Wilde-mom to Otis, 7, and Daisy, 5, who she shares with ex Jason Sudeikis.

However, Harry debunked the rumours during an April 1 appearance on Heart Breakfast by confirming that the voice belonged to that of his 5-year-old goddaughter Ruby Winston-daughter of British filmmaker Ben Winston.

“it’s my goddaughter at the start of the song,” he told hosts Jamie Theakston and Amanda Holden. “That streak of calling me every night before bed and I missed it once and she wanted to let me know that she was quite angry with me about it. And then I dug it up in the studio one day and added it to the start of the song, and it just kind of stuck. I loved it.”