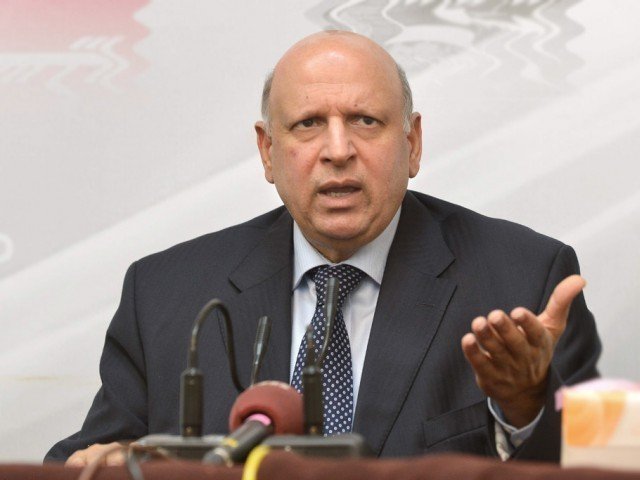 ISLAMABAD: The federal government has sacked Punjab Governor Chaudhry Mohammad Sarwar as political tensions reach a pinnacle ahead of the vote on the no-trust motion against Prime Minister Imran Khan.

“The announcement regarding new Punjab governor will be made later, while deputy speaker of [provincial assembly] will be the acting governor in the meantime,” Fawad wrote.

Sources within the federal government said that Sarwar has been removed from his post on PML-Q leader Chaudhry Parvez Elahi’s request, for allegedly campaigning for Hamza Shahbaz in the election of the chief minister.

It is to be noted that Elahi is contesting against Opposition’s candidate, Hamza, for the coveted slot of the chief minister. Sources said that Elahi directly complained to PM Imran Khan about Sarwar on a phone call, after which the premier advised President Arif Alvi to remove the governor.

After the development, the responsibilities of the Punjab governor were transferred to Punjab Assembly Deputy Speaker Dost Mohammad Mazari. Meanwhile, today’s provincial assembly session will be chaired by the panel of the chairman. A tough contest is expected in the Punjab Assembly today between the joint Opposition’s candidate Hamza Shehbaz and the government’s ally Chaudhry Parvez Elahi the chief minister’s slot.

The prized slot fell vacant after the resignation of Sardar Usman Buzdar following a deal between the ruling PTI and PML-Q few days back. Both candidates need at least 186 votes in the House of 371 to win the poll for the slot of CM Punjab.

With the full House comprising 371 MPAs, PML-N seems highly optimistic of regaining the crown of Punjab that it lost in 2018.

The Opposition claims that its joint strength comprising its own 160 MPAs (PML-N total strength is 165 out of which five MPAs are siding with the government), seven MPAs of PPP and rest from the rebel groups of PTI headed by Jehnagir Khan Tareen (JKT) and Abdul Aleem Khan and four out of five independents, stands above 188.

On the other hand, the ruling coalition candidate has also used his experience and influence in winning the support of JKT group MPAs and publicly, MPA Rafaqat Gilani, a part of JKT group has claimed that he was “siding with Imran and cannot leave him in crucial time”.