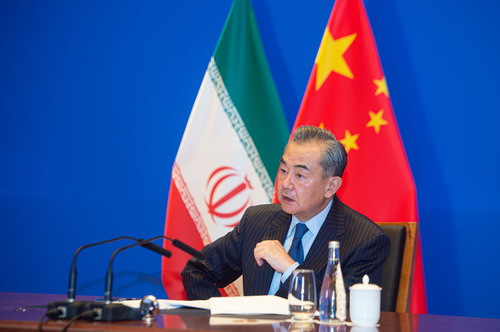 Wang said under the strategic guidance of the two countries’ leaders, bilateral relations between China and Iran have maintained a strong development momentum. China supports Iran in defending its national sovereignty and dignity, and safeguarding its own legitimate rights and interests.

China believes that Iran will also firmly support China in safeguarding its own core interests, Wang said. As a comprehensive strategic partner of Iran, China is committed to deepening bilateral cooperation in various fields, and stands ready to work with Iran to deliver more outcomes of cooperation to benefit the two peoples.

Amir-Abdollahian extended his congratulations to China on the successful hosting of a series of meetings on the Afghan issue, saying that the important consensus reached by the two countries’ leaders has injected strong impetus into the development of bilateral relations. He added that Iran is committed to the development of relations with China, and firmly supports China’s just position. Amir-Abdollahian also expressed Iran’s willingness to expand cooperation on oil and gas with China, and be a reliable energy partner of China. Both parties agreed to strengthen their cooperation in counter-terrorism. Wang noted that both countries should maintain a state of high alert against terrorist forces, including the East Turkestan Islamic Movement, using the situation in Afghanistan to stir up troubles. China supports Iran’s efforts to improve and develop relations with its neighbors, and resolve differences through dialogue, Wang said.The two sides also agreed to jointly resist unilateral sanctions.

Wang said the United States has become the “champion” of unilateral sanctions, which not only violates the basic norm governing international relations but also damages its own credibility and hurts its own interests. Sanctions will not solve any problem, but only enhance the development resilience of the countries that are sanctioned, the Chinese foreign minister added.

The two sides also exchanged views on the negotiation on resuming compliance with the Joint Comprehensive Plan of Action (JCPOA) on the Iranian nuclear issue.