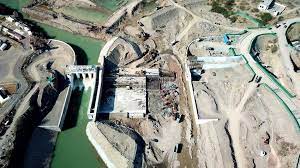 ISLAMABAD: The Phase-1 of Kurram Tangi Dam project, being constructed on the Kaitu River in North Waziristan district of Khyber Pakhtunkhwa, will be completed by next year.

The dam would control floodwater and irrigate barren 35,000-acres land and make the area self-sufficient in agricultural production.

The development work would be completed in accordance with the schedule and stipulated standard of works as the construction work has been expedited on the project, Water and Power Development Authority’s (Wapda) source said.

According to an official of Wapda, the dam would generate 84 megawatts of electricity and help to ensure food security by increasing agricultural production in the border region.

He said at present, water scarcity was the main problem in the area and this dam would bring a positive revolution in the life of millions of natives.

He said with the construction of the dam and utilisation of water, the share of Khyber Pakhtunkhwa would not be affected.

The construction of the Kurram Tangi Dam is considered an important step toward the development of the agriculture sector in the province.

The project will bring socio-economic uplift to the people in the area by creating employment and business opportunities as it would greatly increase the development of fisheries in the area.