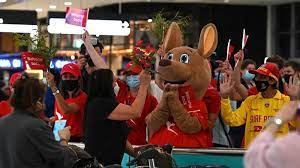 SYDNEY: The daily cases of COVID-19 have begun to stabilise in Australia’s eastern most populous states, abating initial fears that the Omicron BA.2 sub-variant would trigger a new wave.

The daily cases in New South Wales (NSW) fell to 16,199 on Monday, marking the fourth consecutive day in which cases dropped from a high of 24,803 reported last Thursday. However, the number of patients in hospitals with the virus jumped by 100 overnight to 1,270.

In the nation’s second-largest state, Victoria, 8,739 new cases were reported on Monday after a peak of just over 10,000 late last week.

Similarly, cases in Queensland have eased off over the weekend falling to 7,816 from over 11,000 late last week.

Queensland’s Health Minister Yvette D’Ath said on Sunday that they are expecting the peak is yet to come.

“We’re not sure when this wave is going to peak but we expect some time in April,” said D’Ath.

Fears that the more transmissible BA.2 sub-variant, which has fast become the dominant variant across Australia, would lead to a sharp uptick in cases has so far not been seen.

In a recent interview with Xinhua, Chair of Biostatistics and Epidemiology at the University of South Australia, Dr. Adrian Esterman said the variant would likely present a challenge as states look to live with the virus.

“As a result of the increasing dominance of BA.2, plus the removal of public health measures, we are starting to see increases in case numbers in most states and territories.”

“At the same time, we are approaching the flu season, which could be particularly bad this year.”