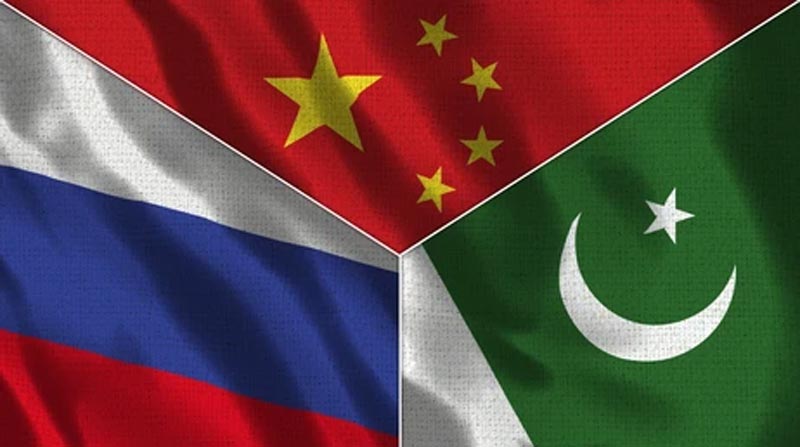 In Pakistan, we often talk of Russia and China as if they are the same, more like a de facto alliance rather than two separate entities. Moscow’s faith in China is not ‘unconditional’, it is ‘contained’. Different issues color the Russian approach towards China that is different based on its importance of the given issue. These include China’s increased strengthening position in the world and regionally, it’s ambitious Belt and Road Initiative, fundamental interests in security, changing behavior of the West towards China among others.

However, this relationship has to do everything with their own national and international interests, and not forced upon them by the West. The annexation of Crimea brought both closer. In 2015, Russia-led Eurasian Economic Union and the Belt and Road Initiative spearheaded by China were declared complimenting each other, as President Xi Jinping visited Moscow. Russia in all probability wanted China to extend its economic arm to pick up financing at least some of the projects losing out due to EU investment as a result of sanctions. However, China did nothing to break the sanction jam-lock. Things, however, continued to improve between the two, but only keeping their own national interests in mind.

China’s emerging role asserting herself in ways unlike before is not considered a threat by Russia yet, unlike the posture by the West. Russia sees the Western policy of exporting their ideology based on a value system as a threat. However, Chinese approach is based on trade and economical aspects. Therefore, the Russia-China closeness is based not on ideology but on stepping away from one. They work within a loose and an informal structure. They therefore do not have a clear path on any joint steps they may take on issues.

It would be safe to assume, shrewdly assuming that is, that the relationship will undergo a change in future. China is emerging and may continue on this path for some time. However, once China is in a much stronger position, will Russia start seeing it as a rival rather than an ally? What will be the economic and international economic and political dynamics be then? China’s policy to take the world center stage will not appeal to Russia in times to come. With the West’s recent change in posture to not to act as the ‘world’s policeman’, the fallout between Russia and China will be hurried along. Putin’s departure from office will likely improve relationships with EU particularly on Ukraine front. All this will not happen immediately but will happen in another decade, at the outside.

Enter Pakistan. Sublimely oblivious to the finer threads of Russia-China relationship. Lacking a strategy. Jumping from ship to ship, navigating short-term benefits at the cost of long-term ones. The one aspect that the ‘experts’ never stop projecting is the ‘strategic global position’ Pakistan enjoys. The time is already here when this very strategic position will tighten like a noose in the country’s neck. With US and allied forces’ departure from Afghan shores, Afghan assets frozen, more refugees pouring in Pakistan in times of FATF, WB, IMF pressures will be dragged down due to this very strategic position. Our ‘experts’ fail to understand that as times change, relationships change, a strong point can become a weak one and vice versa.

Already, China’s Belt and Road Initiative and US increased engagement with India is leading Moscow to engage with Pakistan. The ball has already started rolling. As Pakistani ‘experts’ cried with joy at the seating arrangements of meeting between Khan and Putin during the former’s recent visit to Moscow, they completely missed the bigger picture. A malaise that affects most here.

One example of increasing overture is Russia looking towards Pakistan as a near-future energy client. ‘Currently, Pakistan has a gas shortfall of 1.5 billion cubic feet per day (bcfd), which would double by 2025.’ [Viktor Katona, “Qatar Looks To Dominate This Very-Fast Growing Gas Market”, Oilprice, 6 April 2021] Russia views Pakistan as a buyer to help it partially meet the target to triple its LNG exports in near future. Pakistan’s desire to procure liquefied natural gas from Russia is due to government mismanagement. Failing to place timely order, and facing increased demand vs lower supply, costs of imports spiral with stringent terms, leading to increased price of electricity with rising subsidy. This situation further reduces consumer buying power, creates high cost of production thereby making products locally available more expensive and exports non-competitive.

Placing more burden on depleting reserves, Khan announced Pakistan will import 2 million tons of wheat from Russia under a bilateral agreement [besides gas]. How this plays out after tougher international sanctions against Russia will have to be seen. One thing is for sure: this is not going to sit well with the Western nations.

The PTI government has not paid attention to the cause of reduced local production in past three years. This includes increased costs of seeds, diesel, fertilizers, and low-quality inputs in different areas and instead focused on importing wheat. This means the production will continue a downward trend without arresting the reasons and increasing import of wheat leading to placing stress on reserves. The imbalance between imports and exports will increase further.

On the other hand, China’s role in South Asia is expanding rapidly and it is in Russia’s interests to counter-balance this footprint. What better than choosing Pakistan not only India’s regional rival but also the soil where China has launched its signature BRI project: CPEC. Not a Russian ally by any standard, Pakistan needs to have a policy making process to analyze the under currents and trends to devise a policy based on different changing timings to make her stronger rather than leading her into any quagmire.

An interesting and pertinent excerpt from a paper written by Claudia Chia, Zheng Haiqi is quote worthy, ‘The asymmetry of Pakistan-China economic relations, the issue of indebtedness, the lack of opportunities for local firms, and the perceived intrusion of Chinese companies are divisive and thorny problems for Islamabad. Over the years, series of protests, killings of Chinese workers and property destructions have threatened China’s activities across Pakistan.’

Pakistan policymakers are making the mistake of treating Russia and China as one and the same. The time may not be far away where she will have to choose between the two. Relationships must be built understanding the underlying nuances and shrewd strategies. Not frog-hopping.