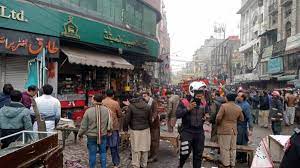 LAHORE: Two persons along with a child were killed and 25 others were injured in a bomb blast in the busy Anarkali area of Lahore on Thursday.

The injured were transferred to the city’s Mayo Hospital. Around nine injured persons were in a precarious condition, hospital sources said.

The explosion damaged several motorcycles parked at the place of the incident. The impact of the blast also shattered window panes.

Security forces personnel cordoned off the area and cleared it from unconcerned persons. The bomb disposal squad initiated an investigation of the incident.

The Medical Superintendent Mayo Hospital has been directed by authorities to declare an emergency in the hospital to tackle the situation.

The hospital administration has also been directed to provide the best medical facilities to the injured.

Chief Minister Punjab Usman Buzdar condemned the blast and said that those responsible would be arrested and justice would be ensured. “This incident is aimed at sabotaging the atmosphere of law and order. Those responsible for the blast will not be able to escape the clutches of the law,” he said.

PML-N Vice President Maryam Nawaz said that a blast in an area like Anarkali was incredibly sad and disturbing. She prayed for those killed and injured in the incident.

PPP’s Sherry Rehman tweeted that she was “shocked and sorry” to hear about the blast in Lahore.

PML-N President Shehbaz Sharif expressed grief over the incident and extended condolences to the families of those killed in the blast.

“I am deeply saddened by the loss of precious lives in a blast in Lahore’s historical and lively area of Anarkali,” he tweeted.

(This is a developing story)